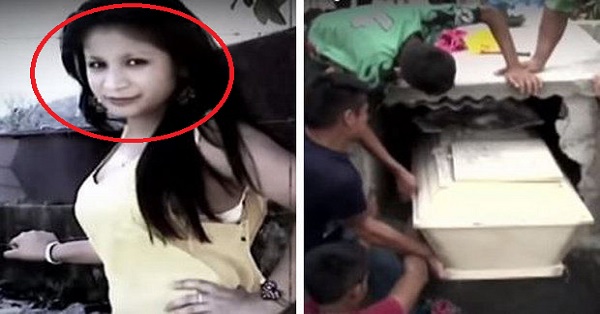 Family of the pregnant teenage thrashed the concrete tomb in which they buried a 16 year old teenage member of the family, who was three months pregnant, after her husband heard her shouting from the tomb after a day she was buried. The Independent reported that the family members of Neysi Perez, who belonged to Honduras thrashed the concrete in which Neysi’s coffin was kept in an attempt to free her. The family has talked to the reporters telling them that glass window of the coffin was broken and her fingers were injured in making an attempt to get free.

After taking her out from the coffin, family took Neysi to hospital but the doctors found no sign of Neysi being alive. Later she was buried in the same mausoleum in La Entrada General Cemetery.

The TV news channel Prime Impacto broadcasted the video showing the family breaking the concrete tomb. Rudy Gonzales, Neysi’s husband said, “It had already been a day since we buried her. I couldn’t believe it. I was ecstatic, full of hope.” It is said that she had a panic attack just outside her home in La Entrada when she heard gunfire. Foam started coming out of her mouth and her parents believed that she has been possessed by a spirit and approached a local priest for exorcism.

When they can’t feel life in Neysi, they took her to hospital where doctors declared her dead. What doctors believed is that the panic attack must have halted the functioning of Neysi’s heart temporarily stopping the muscle action, which made her body lifeless.