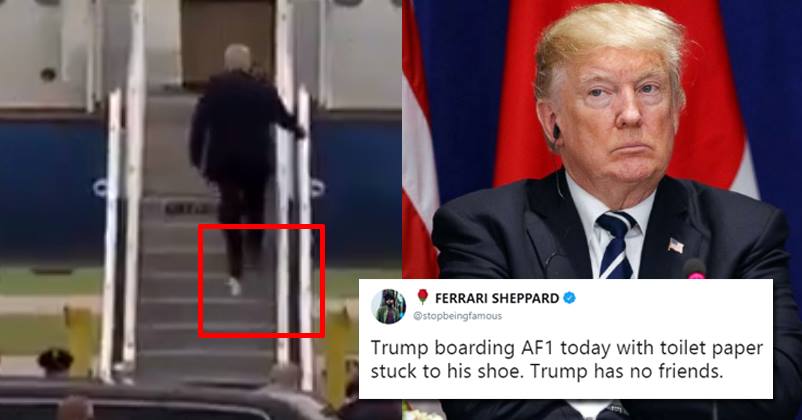 During Elections in the US,… President Donald Trump appeared as the strong leader and presented himself as a strong man, he also won by the majority of votes but from then onwards has became a laughing stock and meme worldwide. 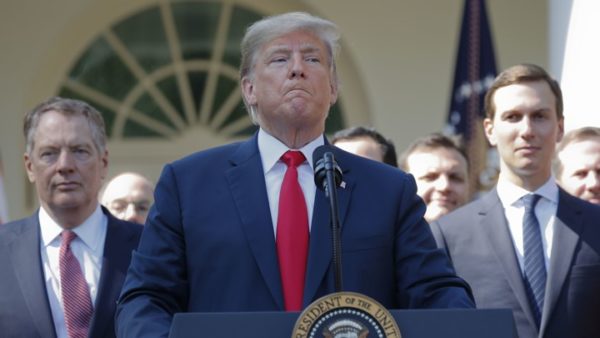 Once Trump was owned by a school teacher because of his poor grammar and now President Trump was spotted with a piece of ‘toilet paper’ stuck to one of his shoes and people can’t stop laughing.

In a footage, Trump walking up the stairs to the aircraft at the Minneapolis- Saint Paul International airport and when he reached the top of the stairs, he moved back to the crowd. There are many staff members around but no one alerted him and left everyone cracking the jokes.

Here is the Video

And as soon as this video went public, people bursted out with laughing

I honestly cannot believe it’s taken this long for Trump to board Air Force One with a full strand of toilet paper trailing from his shoe. https://t.co/hLWrqKqsIK

Today Trump boarded Air Force One with toilet paper stuck to his shoe.

How’s that for a metaphor?
https://t.co/jbko5CVvmx

Trump boarding AF1 today with toilet paper stuck to his shoe. Trump has no friends. https://t.co/BbMU66uwNV

Okay, so this made my day: Trump boarding AF1 with toilet paper on his shoe. All is good in the world (for 30 seconds). https://t.co/wR0KQpMcZF

Pathetic? Perhaps. But this made my day. The fact that nobody told him. You know they saw. Speaks volumes. 😏 https://t.co/xhT26OPNXX

Today a piece of toilet paper boarded Air Force One with Donald Trump stuck to it https://t.co/hAp2EHBO4v

There once was a man named Trump
Who needed to take a dump
But when he was through
Stuck tissue to shoe
Rather than wiping his rump#NationalPoetryDay https://t.co/6J8aTCcPGM