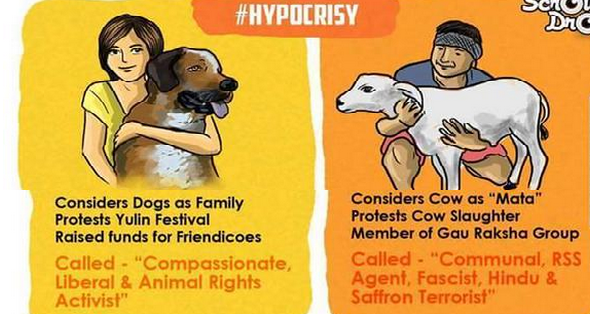 After the Dadri murder case, the matter of beef ban has gained a lot of prominence in the media as well as the public. Some want a complete beef ban in India while some are opposing it citing as the violation of their freedom of choice to what they eat.

In Dadri, a person was killed by an angry mob just on the basis of a suspicion that he and his family have eaten cow meat. After this incident, the debate on beef ban has got heated and this heat can be felt on the social media networks also.

#PrideOfCows is trending on twitter as the supporters of beef ban are not only trying to explain the reasons behind their demand of beef ban but they are also explaining the benefits of the products that are made with the milk that is procured from the cows. There are some users who are totally against beef ban and they consider cow just as any other animal and calling it mother seems illogical to them.

Here are some tweets which will give you an idea of the mood that was flowing under the #PrideOfCows:

#PrideOfCows India was once known for its rich Cow wealth and milk production, now its famous for cow slaughter. pic.twitter.com/MPzOqT0f45

This pic is the best depiction of how Congress has looted Indians. #PrideofCows @DrGPradhan @KiranKS pic.twitter.com/pud7e08Nab

Cow is mobile dispensary, she give us many medicine as per Panchagvya #PrideOfCows

#PrideOfCows Prevent Cow-slaughter – A conspiracy to destroy the seat of faith of Hindus ! http://t.co/1KSrJLP12X pic.twitter.com/z84WINwt6d

Those who feeds, gives shelter, takes care of Cows is the Real Protector of the Cow but not the one who gives speeches.
#PrideOfCows