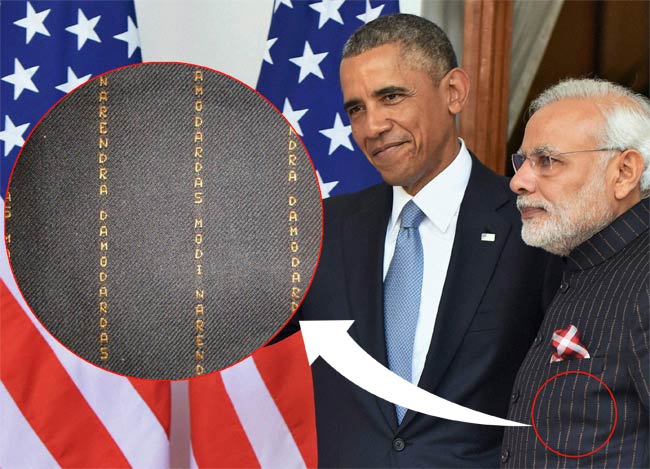 To the utter amazement of every Indian, PM’s monogrammed pinstriped suit has been bid Rs 1.21 crore and the bidder is a businessman from Surat, Rajesh Juneja. Previously, the suit was bid Rs 1.11 crore by Viral Chouksey who is a Gujarati NRI. More to the point, it was Suresh Aggarwal who made the bid reach the level of rupess one crore.

To quote his statement, “I have offered Rs 1 crore. This is work of charity and when the Prime Minister is doing for a great cause like cleaning of Ganga, I decided to go ahead and buy the suit.”

However, Modi’s suit had been initially bid by Rajubhai Agarwal and the amount was Rs 51 lacs. In the auction, there will be around 455 articles with that suit. These items had been gifted to the PM in the course of about nine months for producing finances with regard to Modi’s “Clean Ganga Mission”.

At the same time, it is also worth mentioning that the suit on which PM’s full name is written in stripes was worn by him when Obama visited India previous month. In addition, this suit always drew the criticism of opposition parties as well as media, being an issue of debate and the cause of PM’s condemnation on wearing such a costly outfit.

In the meantime, TMC pesters the act of auctioning, affirming this as a damage control exercise. According to Derek O’Brien, “This is DCPR, Damage Control Public Relations, this has nothing to do with Ganga cleaning”.