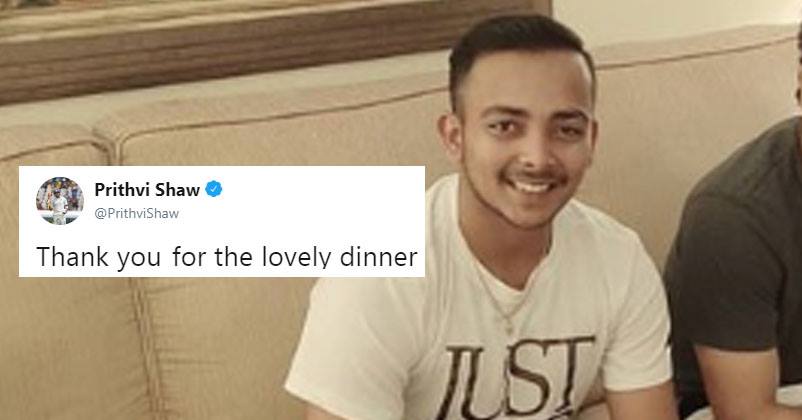 Before Delhi Capitals and Mumbai Indians face off in Feroz Shah Kotla stadium tonight. Young Prithvi Shaw had a memorable dinner last night as he was invited by his idol Sachin Tendulkar for Dinner on Wednesday in the team hotel in Delhi.

Prithvi took to social media to share the picture of him having dinner with the god of cricket.

Thank you SACHIN SIR for the lovely dinner ♥️ It's always a pleasure meeting you SIR 😌 @sachin_rt Sir pic.twitter.com/VLuR9Bee1O

Shaw who is currently playing for the Delhi Capitals in Indian Premier League and the legendary cricketer is the batting mentor of Mumbai Indians.

WHEN A DREAM BECOMES REALITY❤️ #10yearchallenge👍

Prithvi who is not consistent in this season of IPL scored 187 runs in 8 matches and 99 runs are his highest score by far with an average of 23.37.

I BELIEVE THAT IF ONE ALWAYS LOOKED AT THE SKIES, ONE WOULD END UP WITH WINGS ✅ @sachintendulkar SIR🇮🇳

Delhi Capitals has been killing it lately and has won three consecutive matches against Kolkata Knight Riders, Sunrises Hyderabad and Royal Challengers Hyderabad. Feroz Shah Kotla which has been criticised for its slow pitch.

Ricky Pointing has described it as the worst track a home team can have after losing a match earlier in the tournament.

The eyes will be on the match tonight which team wins the game in the slowest possible track.

CSK Lost To SRH In Dhoni’s Absence. Fans Shared Funny Memes To Show How Much They Missed Dhoni
Ranveer Singh Declared The Release Date Of 83 The Film With Behind The Scenes Video