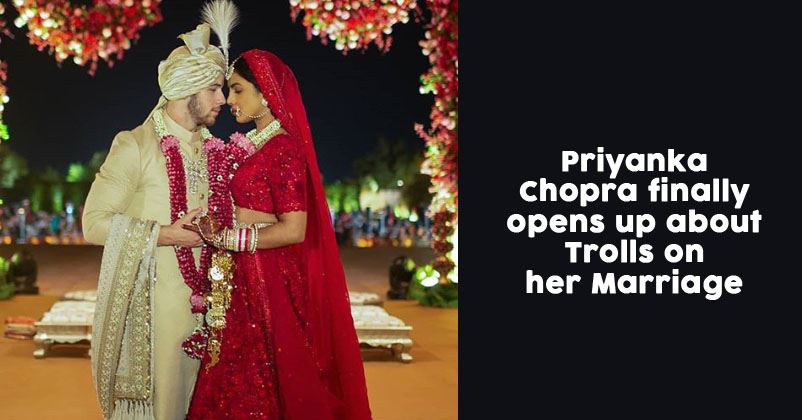 Priyanka Chopra Finally Opens About Her Marriage, And The ‘ Age Difference’

Nick’s marriage to Priyanka Chopra led to a lot of memes and bullying too. Despite this negativity, they got married in November last year. Though when Priyanka Chopra was asked about this criticism she said, ” People gave us a lot of sh*t about that and still do. I find it really amazing when you flip it and the guy is older, no one cares and actually people like it.”

A journalist from a well-reputed firm also went out to call her a “scam artist”, which went viral. Though he later made a public apology, this does not change the fact about the harassment and bullying they both faced. Needless to say, people were furious with the article.

Priyanka Chopra also revealed after the article was published,” Nick, Joe, Sophie, my mom, his parents, everyone was there furiously typing on their phones. They were so mad.”

In an interview with Sunday Times, she also told about the hate she received because she ‘shared too many pictures from her wedding’. To which she said,

“If I wasn’t a famous person and I’d just got married, don’t you think my Insta would have photos of me and my husband? Just because I’m famous, don’t I have the ability to be proud of being a newly-wed without people saying that I’m using my marriage? I gave up my right to privacy when I became a public person, it’s the deal you make with the devil. But trust me, there are lots of things I still keep personal.”

Priyanka kept her head high and handled this situation with courage and grace.