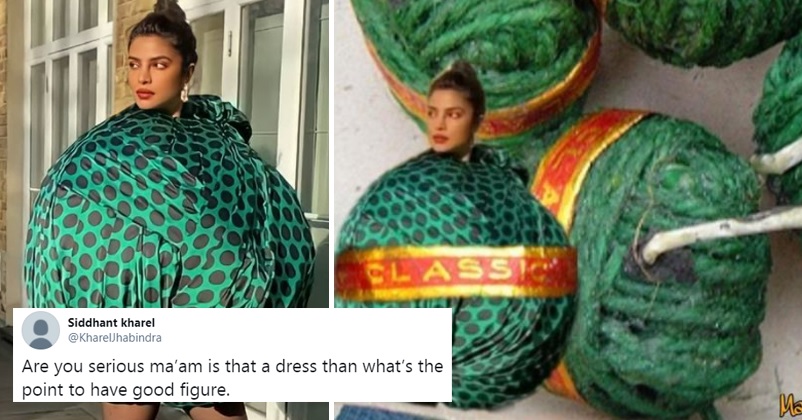 Priyanka Chopra Jonas, the Bollywood actress who is making India proud by working in international movies as well, has a great fashion sense but sometimes she wears such unique dresses which give ample fodder to memers and netizens to come up with creative stuffs and give it all a hilarious turn. Recently, Desi Girl wore a green polka dot ball-shaped outfit that was titled as “Polka Dot Draped Orb” which was a part of the Halpern Studio’s Spring Summer 2021 collection.

As per a leading daily, Priyanka wore that dress during a video call with a very famous Instagram dog Tika. Soon after that, PeeCee’s photos in ball-shaped outfit went viral and social media got flooded with rib-tickling memes on it.

However, what makes it more interesting is that Priyanka herself loved all the memes and she took to the micro-blogging site Twitter for thanking all the creative people for making her day.

Check out her tweets:

Here are some other memes for you to enjoy:

This one is too funny 😂 pic.twitter.com/XbLDt67VaC

so this is what they meant by lollipop laagelu pic.twitter.com/jHITvEsTqR

When you see it 🐒 how's it? pic.twitter.com/mPMOziupmu

my room's chair every time : pic.twitter.com/kXyT8bZDJp

When a user questioned Priyanka on wearing such a dress when she has a beautiful figure, her answer certainly increased respect for her in eyes of her fans.

The fan wrote, “Are you serious ma’am is that a dress than what’s the point to have good figure.”

Are you serious ma’am is that a dress than what’s the point to have good figure.

The “Fashion” actress replied with, “The fact that a ‘figure’ doesn’t matter, that’s the point.”

Priyanka Chopra Jonas was recently seen in movie “The White Tiger” which also starred Rajkummar Rao and was based on the book written by Aravind Adiga by the same name.

There is no denying the fact that Priyanka’s dress is out-of-the-box but laughing on oneself is an art not everyone knows and PeeCee is the master of it! Kudos to her for enjoying what all fans shower on her in form of their love!