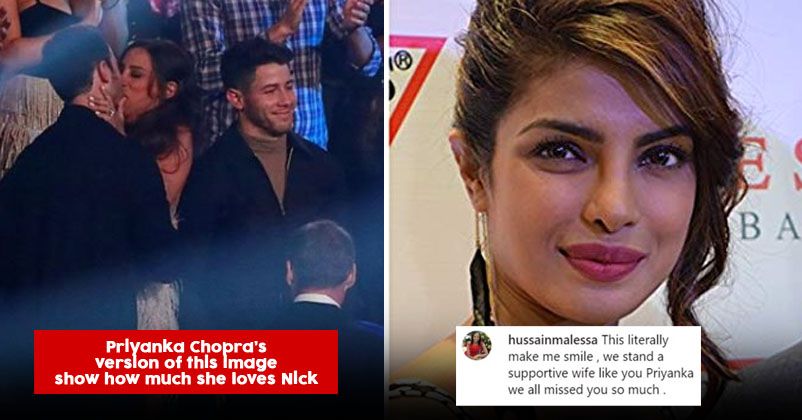 At the VMA on Tuesday the Jonas brother performed their award-winning single Sucker amidst loud cheering from the fans and audience. Kevin and Joe were present at the vent with their partners whereas India son in law Nick was alone.

Later when their single was announced as the Best Pop Video, the brothers kissed their respected partners while Nick was smiling and cheering alone. It was clearly visible on his face that he is missing his life partner and Bollywood desi girl, Priyanka Chopra.

The picture of the brother soon went viral and grabbed millions of eyeballs.

As soon as the picture was uploaded on the internet, everyone wanted to know where is Priyanka and why isn’t she with him. To which Priyanka replied with an edited photo. She photoshopped herself in the picture hugging Nick. She captioned the picture, “I’m always with you @nickjonas 😜😍Congratulations @jonasbrothers! I’m so proud of all of you! #sucker”

I’m always with you @nickjonas 😜😍Congratulations @jonasbrothers! I’m so proud of all of you! #sucker

Priyanka’s photoshopped picture gained a lot of attention from the netizens. fans went gaga over this mushy love and poured in lots of comment on Peecee’s post.

Coach Ravi Shastri Trolled For His “Hot” Picture From Antigua Vacation, Here’s Why
The Truth Behind Salman Khan Gifting A House Worth 55 Lakh To The Viral Singer Ranu Mondal