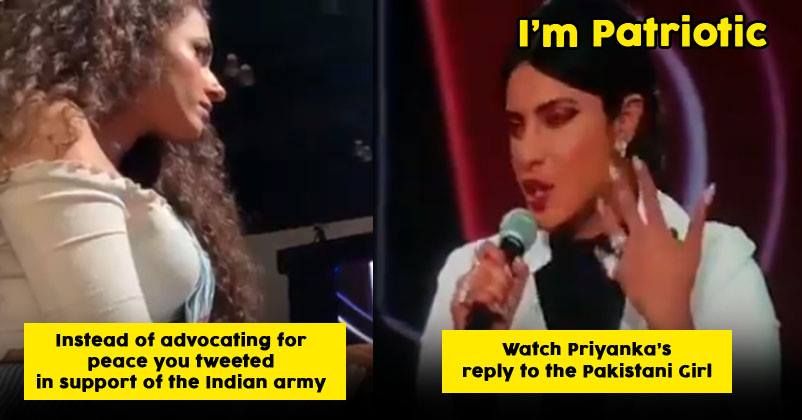 Recently, our Desi girl Priyanka Chopra was accused of being a hypocrite by a Pakistani woman. She yelled at Priyanka for tweeting in favor of Indian Army in the follow up of Pathankot airstrike happened this year in Febraury regardless of being the United Nations Goodwill Ambassador.

Recently a Pakistani woman named Ayesha Malik accused Priyanka for encouraging nuclear battle against Pakistan at a Beauty Con event in the USA.


The young girl pointed her fingers at Priyanka while venting out at her. She questioned the Quantico star, how can she support nuclear conflict against Pakistan even after being the United Nations Goodwill Ambassador.

The lady further said, people like me supported you in your business. Priyanka didn’t lose her cool and maintined her dignity and composure. Priyanka clamly responded, I hear you, whenever you are done venting. Got it, done?


The Bollywood star futher said, I have got many friends from Pakistan and I am from India. I’m not fond of conflict between both the country but I’m patriotic. so, I am sorry if i hurt the sentiments of the people who love and support me.

Priyanka further concluded, but I believe everyone has a sort of middle ground the we all have to walk. Just like you do as well, but the way you came at me right now girl, don’t yell. We’re here for love. So don’t yell and embarrass yourself.

The world is hailing for Priyanka for not losing her dignity and composure.

Continue Reading
You may also like...
Related Topics:Priyanka Chopra, Priyanka Chopra Replies To The Lady Who Accused Her Of Encouraging War Against Pakistan