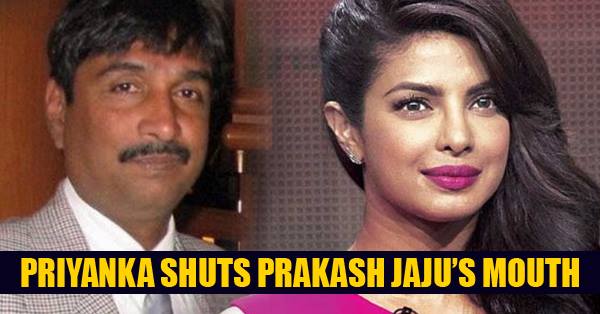 Recently, Priyanka Chopra, the famous Bollywood actress has arrived in India for collecting her Padma Shri award in New Delhi from Pranab Mukherjee. She has been conferred with the 4th highest civilian honor of India. While interacting with media, Priyanka Chopra dismissed all claims that were made on her by Prakash Jaju, her former manager. Recently, a controversy was created by Prakash Jaju as he alleged that the actress tried committing suicide during struggling days. Finally, Priyanka has broken silence and slammed the media since it has given credits to the tweets of Prakash Jaju.

At an event, Priyanka told the reporters that it is quite sad how credibility is given by the media to the man who was in jail, due to harassing her, without cross-checking about the person’s history. She didn’t want to comment anything as she believed that the man has no credibility.

This controversy was created by Jaju few days after Pratyusha’s suicide. The actress talked about the same and said “Why don’t we talk about those women, who commit suicide because they were harassed by the mother-in-laws or being beaten in their homes? Or they kill themselves because they are unhappy in their homes? It’s so easy to turn around and say about the showbiz world.”

Disappointment was expressed by the actress as media has talked about the death of Pratyusha without knowing the facts. She adds that young people commit suicide in hostels and colleges and she believes that instead of killing ourselves for that person, it is better to kill that person.

Akhtar’s Reply To Sehwag’s Tweet Would Increase Your Respect For Him 100 Times! Check Out
These 11 Pics Of This Bollywood Actress Prove That She’s Amazingly Flexible