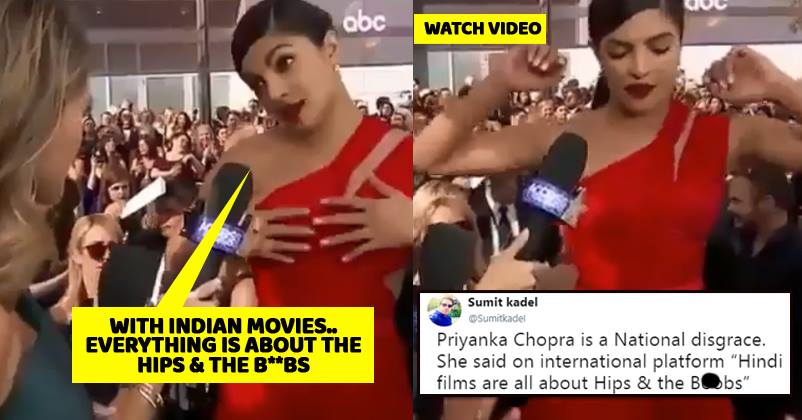 Priyanka Chopra has been making headlines for some days for all the wrong reasons. Firstly an episode of Quantico that showed Indians in a poor light didn’t go well with people and they slammed her for being part of such a show just for the sake of money.

Now an old video featuring Desi Girl is going viral on web and social media sites in which the actress makes an unpleasant and rather objectionable remark about Indian movies and Bollywood. 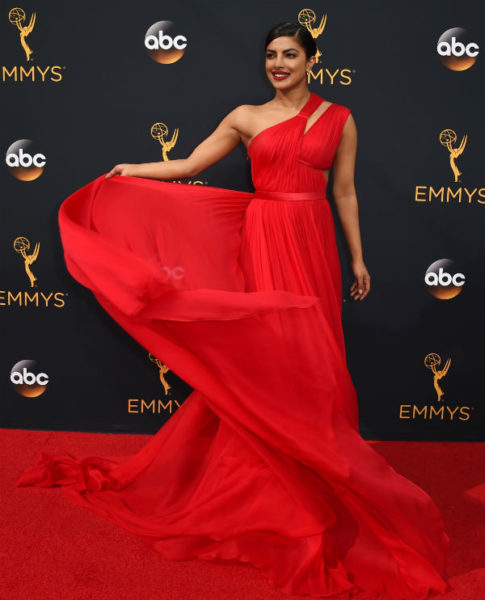 It so happened that at the Emmy Awards 2016, two reporters asked her to teach them some moves of Bollywood. Before showing any move or step, Priyanka said,

“With Indian movies, everything is about the hips and the b**bs. So all movement is just about hips and b**bs.”

Even though the video is old, it’s sparking a lot of controversy on social media and Indians are slamming Priyanka mercilessly. Check out some selected tweets:

Priyanka Chopra is a National disgrace. She said on international platform “Hindi films are all about Hips & the Boobs” I Request Nationalist @aliabbaszafar to kick her out from #Bharat . 🙏🏻🙏🏻🙏🏻🙏🏻🙏🏻🙏🏻 https://t.co/A4RGy6vI1j

At the Emmys, Priyanka Chopra explained 'Indian dance' to be all about 'hips and boobs'..

On another note, I need to know, how to control the urge to smash someone's face!

Priyanka Chopra says Indian movies are all about Hips and Boobs, so it.means for so many years she was minting money from her hips and boobs show …? pic.twitter.com/tuMijGYOL7

Unexpected from Priyanka Chopra tbh describing our movies in that way is so so wrong ffs Indian movies are known for family drama & music & dance.. since when it is about boobs hips @priyankachopra which planet you live in? Cool banne ki ghatya koshish saali chutyaah. https://t.co/fRFiykPuPu

I curse that both her hips and boobs will be punctured and she will not be able to get any roles and money.

Dear @priyankachopra India is not about hips and boobs, passing cheap, sweeping generalisations about India reinforcing stereotypes that the west so desperately wants established.
Do us a favour, Don't come back to your third world home, stay there, be their pet.#shameOnPriyanka

Basically she sumarized her whole career in two words: hips and boobs!

Hips and boobs correct, because I cannot remember the last time you acted well @priyankachopra https://t.co/rjRqtuwNRO

What do you have to say about Priyanka’s remark? Let us know your views.

A Fan Threw National Flag On Sunil Chhetri For Autograph, The Captain Got Angry And Did This
10 Hilarious Pics Which Will Make You Say, “This Happens Only In Pakistan”