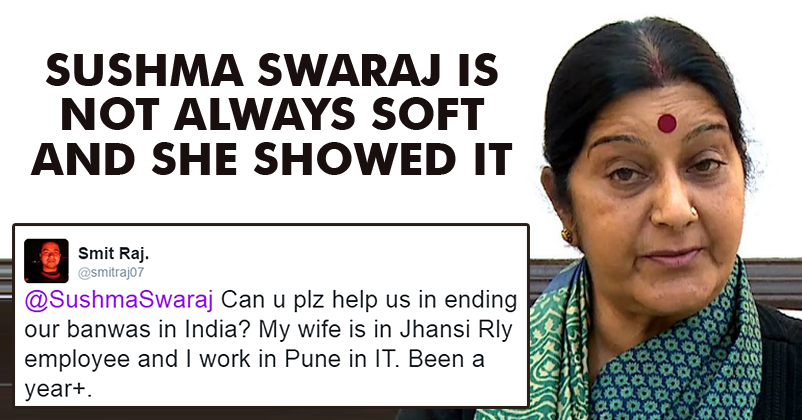 Sushma Swaraj has always been a savior; she is known for her helpful and quick responses on Twitter. The moment someone tweets her, she is ever ready to extend her support. Be it helping girls, be it supporting a pregnant lady with her newborn or be it reuniting an Indo-Pak couple, Sushma has always won hearts. So far, we all have just seen her sweet avatar; we would hardly believe that she can lose her cool too. Yea, you heard it right; on Sunday, she became very furious after she received an annoying request. People should understand that her account is only for valid requests and not for TIMEPASS. They should have the ethics to speak to the external foreign affairs minister.

Here’s what he tweeted;

Can u plz help us in ending our banwas in India? My wife is in Jhansi Rly employee and I work in Pune in IT. Been a year+.

He compared this situation with the term “Banwas”, which was not at all ethical and this infuriated her to a great extent. He used this word, because Sushma had used it when a man from the US tweeted her for his wife’s passport. Smit Raj tweeted in the same thread and tried trolling her by using “Banwas”.

She was prompt enough in replying, but this time, her tone was completely different.

If you or your wife were from my Ministry and such a request for transfer was made on twitter, I would have sent a suspension order by now. https://t.co/LImngQwFh6

This didn’t end here; she even tweeted to Railway Minister Suresh Prabhu and showed him the request she had received. Here’s the tweet…

1/Thanks @SushmaSwaraj ji for bringing it to my notice.As per policy laid by me,I don't look into transfers.Railway Board empowered for same https://t.co/WSqxinGx1u

It seems she wasn’t in a good mood that time. However, Raj should have tweeted something professional to get a good response. Moreover, Railway transfers don’t come under her department and so it might have been more irritating.

What do you have to say? Do share your views in our comments section below.

BSF Jawan Shares 3 Videos About Their Condition & Kind Of Food They Get! You’ll Hate It!
This Video Of Live “Ghost” Proof Will Not Let You Sleep Tonight