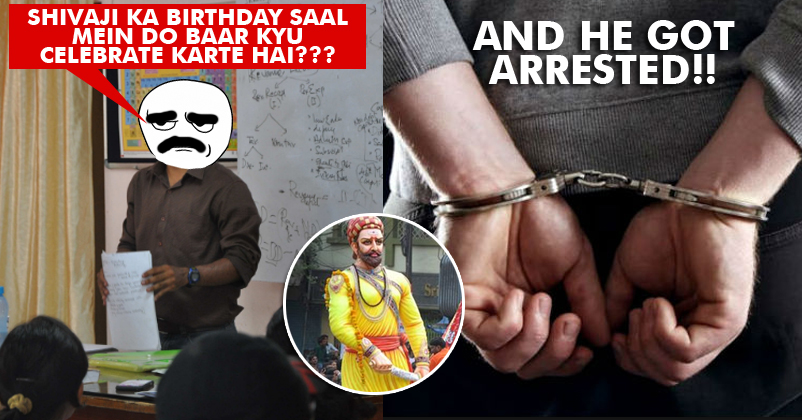 It seems like nowadays people’s sentiments are quite brittle. It is so brittle that even a harmless genuine question can supposedly become a big threat to the identity and belief system of the whole fundamental ideology that they stand for. A Guru is your mentor, someone who guides you, someone who helps you reach your goal that you have set in your life. Disrespecting him is for sure a big sin. But not for the students who attacked a 38 years old professor from Khopoli in Raigad district for asking a simple question on Chatrapati Shivaji’s birthday. The professor’s name is Sunil Waghmare, who teaches in the Commerce Department at KMC College. And the question that landed him in trouble was, ‘Why do we celebrate Shivaji’s birthday twice in a year?’ For people who don’t know the answer, it’s because there is still lack of clarity of the exact date of his birth. So the occasion is celebrated twice in a year, i.e in the month of February and March. *BTW, it’s okay if you don’t know the answer. We won’t file a complaint against you* The whole incident took place during a simple WhatsApp group conversation where the professor asked the question that why is Shivaji’s birthday celebrated twice in a year. And the very next day, he was assaulted by his students and fellow colleagues. The group admin lodged a case against the professor and he was booked under the IPC section 295(A), i.e hurting people’s religious sentiments. However, the professor was later released on bail. Prof Nagargoje, who filed the complaint against Waghmare said that he asked Waghmare to take back his comment. “He is senior faculty and I know him since 2012. That night on WhatsApp, when he made the comment, I asked him to take back his words but he refused. So, I decided to delete the group altogether. On Friday, when I was in the staff room, I got to know that he was attacked” he said in an interview given to Mid Day.

According to the Police Officer, Waghmare’s remark in the Whatsapp group attracted a lot of strong reactions against him from different group members. Due to a number of complaints by people to the KMC Commerce Department Management, they were forced to suspend Waghmare.

Seems like people forgot that he was the professor in a Commerce Department and not in the History department. It is okay if you don’t know a specific part of the history. Raising questions about issues aren’t always meant with an intent to hurt someone’s feeling. Such a question can come into anyone’s mind and according to us, he or she shouldn’t be assaulted for this.

23 Universities & 279 Institutes Found To Be Fake! Check Out If Your College Is In The List!
4 Indian Cities Among Top 10 Cheapest Cities! Here’s List Of Most Expensive & Cheapest Cities In World