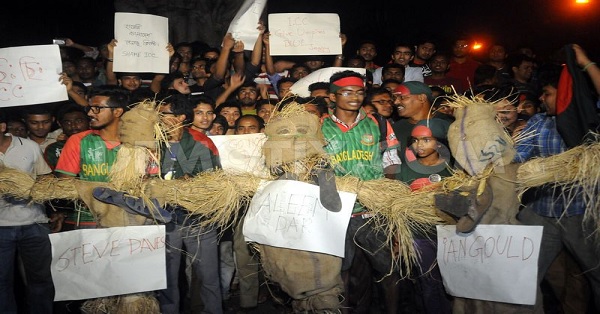 Aleem Dar, the Pakistani Umpire, is only only considered the main offender and the culprit behind all of the commotion that is going on, he is also accused of poor umpiring by Bangladesh Cricket crusaders. People flounced on the streets calling the whole maneuver an international conspiracy played against Bangladesh by ICC, when the team was vanquished from the World Cup.

People are coming down to the streets, making it a full fledged expostulate with the International Cricket World Cup .

“We shall never accept the bias”

“We will always fulminate against the bad decisions. We need ICC to revive the decision and lodge an appeal”
Such were the comments made by the university students who were frenzied over everything that was going on.

“Bangladesh  is a victim of this pathetic intercontinental conspiracy” another protester shouted, as live footage of the demonstrations were broadcast live. Bangladesh cricket fans were furious over Rohit Sharma’s reprieve at 90 and Ian Gould’s ‘no ball’ declaration to Rubel, which according to the Bangladesh Team supporters, was evidently a high-waist delivery.

This controversial match has taken the world by storm, however ICC has decided to lodge an appeal and look into the matter. Mustafa Kamal, the president of ICC has confirmed that the appeal will be lodged against the disputable umpiring conclusions or else he will plan on resigning from his post.

Not The Common People This Time- Robbers Point Dagger to Finance Minister M.P and Wife- Securities Are Under Question
10 Funny Memes Showing Reality Of Bihar Board Exams