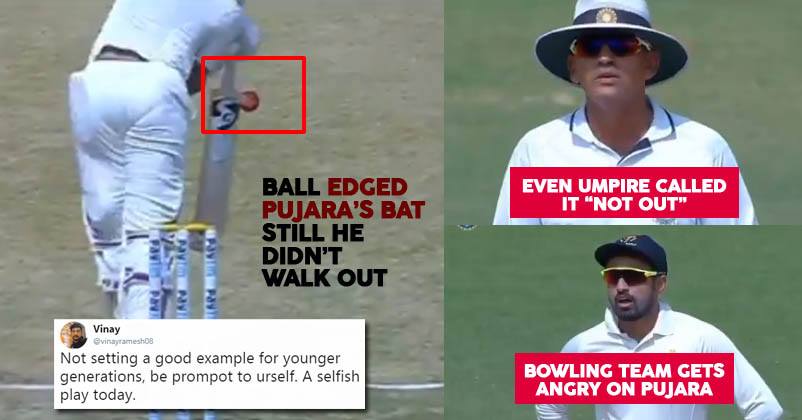 Indian cricketer Cheteshwar Pujara is back in India after performing superbly against Australia in the recently concluded test series and now he is playing for his home team Saurashtra in the Ranji Trophy. Pujara is in news once again but this time for all the wrong reasons. 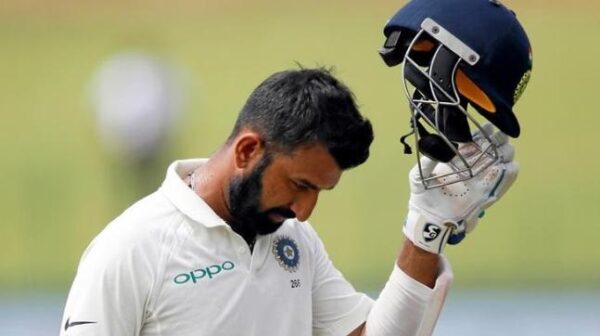 During the ongoing semi-final match against Karnataka which is being played at the Chinnaswamy Stadium in Bangalore, Pujara was given not-out by the on-field umpire despite the fact that ball clearly edged bat and went into the hands of wicket-keeper.

It was Pujara’s birthday so people started saying that the on-field umpire gave him a gift but what didn’t go well with Twitterati was the fact that a senior player like Pujara didn’t walk out himself because it is quite impossible that he didn’t know that he is out. This incident took place in the 23rd over when Saurashtra was 64/2, Pujara was on the personal score of just 1 run and the bowler was Abhimanyu Mithun. However, Pujara fell to the same bowler after scoring 45 runs which he made in 99 balls and at that time, his team’s score was 178.

Karnataka has scored only 275 runs and now Saurashtra seems to be in a good position but fans are criticising the cricketer for not walking out and also the umpire for not being able to make out the nick. Check out some of the selected reactions:

Not setting a good example for younger generations, be prompot to urself. A selfish play today.

very sorry for Pujara.. for his class, he should have walked off..

#SAUvKAR Big Nick from gloves of Pujara and umpire says not out.. International players like Pujara should not have cheated like this

This Pujara’s decision pretty much sums up Mithun’s 2018/19 season. More than half a dozen catches put down in the earlier matches and now, he bowls a Jaffa and gets Pujara — but the umpire doesn’t recognise it. You ought feel for this guy @imAmithun_264 @rayane_mithun #KARvSAU

Very poor umpiring standard in ongoing Ranji trophy matches, Mayank's lbw wasn't given yesterday today Pujara was clearly caught behind of Abhimanyu Mithun's bowling when the rising ball flicked his gloves on the way to wicket-keeper but umpire declared not out, DRS required.

Had you walked on edging today Mr. Pujara, whole cricket community would have held you in very high esteem, not that you are now, however you chose to be counted among the lesser players. Howler by the umpire and the champion cricketer both. @cheteshwar1 ,@RanjiKarnataka #KARvSAU

So an umpiring howler will probably cost Karnataka the Ranji semi finals. Pujara clearly gloves one but given not out

Pujara takes 12 balls to get off the mark and now gets a life. That Mithun delivery was short, touched his glove and went to the keeper. Umpire says no, even the broadcast guy in the enclosure goes back to the replay and says, "Out hai, out hai." @sportstarweb #KARvSAU

What do you have to say about this behaviour of Cheteshwar Pujara? Let us know.

BCCI Lifts Ban Off Hardik Pandya And KL Rahul. Netizens Are Not Happy About It.
New Zealand Police Takes A Jibe At Team India. You Can’t Miss The Facebook Post.