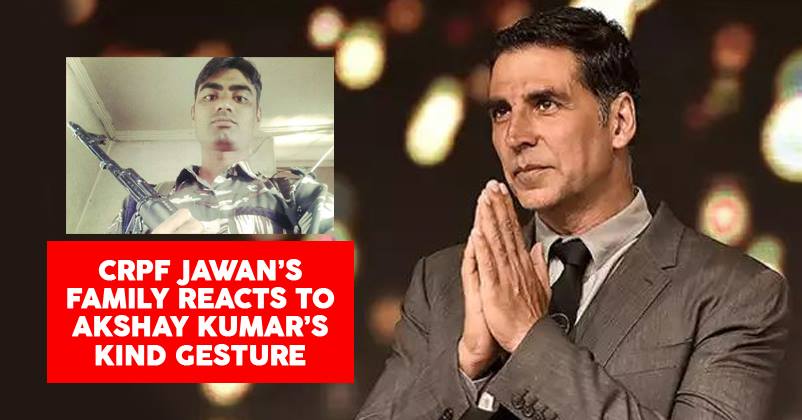 Indian Armed force have always been a strong layer of protection for us. The army men have taken all the bullets coming towards us straight on their chests, just because we are the citizens of India.

During the Pulwama attack, our 40+ CRPF Jawans were martyred and it really angered the nation. A lot of people felt the pain of martyred jawans’ families and helped them financially. May Bollywood celebs also came out in the support of the families in pain.

Remember, Akshay Kumar had donated Rs 5 crores for the cause through Bharat Ke Veer? The superstar has now received appreciation from the brother of a martyr who says that he helped when they needed it the most.

Vikram Singh, brother of a martyr Jeet Ram Gurjar thanked Akshay for helping the family and his sister-in-law with a total sum of Rs 15 lakhs. Vikram also revealed that his brother was the only earning member of the family and the help has come when the family needed it the most.

We are so proud of Akshay!

Continue Reading
You may also like...
Related Topics:Akshay Kumar

Nawazuddin Siddiqui Defends The Khans, Says They Should Not Be Blamed For Flop Films
Bollywood Filmmakers Race To Register Movie Title Based On Pulwama Incident And Surgical Strike 2.0