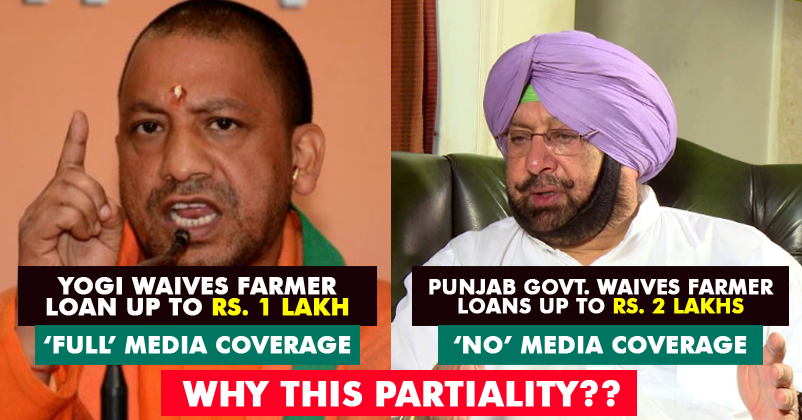 After Uttar Pradesh and Maharashtra, it is now the turn of Punjab to waive-off farm loans. On Monday, the CM of Punjab, Amarinder Singh, made an announcement regarding the waiver of all crop loans for the small and marginal farmers.

Loans of up to Rs. 2 lakh have been waived for small and marginal farmers (up to 5 acres) and a relief of Rs. 2 lakh will be provided to all other farmers who have taken loans. This is one of the major poll promises made by the Congress party during campaigning. Amarinder Singh told the Punjab Assembly that nearly 10.25 lakh out of 18.5 lakh farmers will be benefitted by this step taken by the government. It also includes 8.75 lakh farmers who have land up to the limit of 5 acres. The Punjab CM said,

“The initiative would provide double the relief announced by the states of Uttar Pradesh and Maharashtra.”

An expert group headed by a known economist T Haque was formed by the government and they were given the task of suggesting measures on how to provide aid to the farming community which is already facing many problems. This decision by the government has been made after this expert group submitted their interim report.

The government has also increased the amount of compensation from Rs. 3 lakh to Rs. 5 lakh for the families of farmers who committed suicide.

The government will also review the “Punjab Settlement of Agriculture Indebtedness Act” in order to help those farmers who have taken debt from the sources which are non-institutional in nature. The farmers will get relief by debt reconciliation and settlement which has to be agreed upon by both the parties, i.e., lender and borrower. CM Singh stated, “The government has already constituted a Cabinet Sub-Committee to review this Act.” CM Singh has also put a proposal in the assembly as per which the Speaker can form a committee of 5 members from Vidhan Sabha, who will visit families of victims and find out the reasons because of which farmers gave up their lives. He adds that the government will revoke Section 67 A of the Punjab Cooperative Societies Act, 1961, which deals with the auction of land of farmers.

He has also asked rich farmers to give up power subsidiary voluntarily, which will help the government in providing free power to poor farmers. Singh leads the path by giving up subsidy that is received at his own farms.

What do you think of this step taken by the Punjab government?

Kudos! Punjab Govt Announced Free Education For Girls From KG To PhD
FB Friend Promised Girl Of Getting A Job & Raped Her When She Met Him In Delhi Mall’s Parking Area