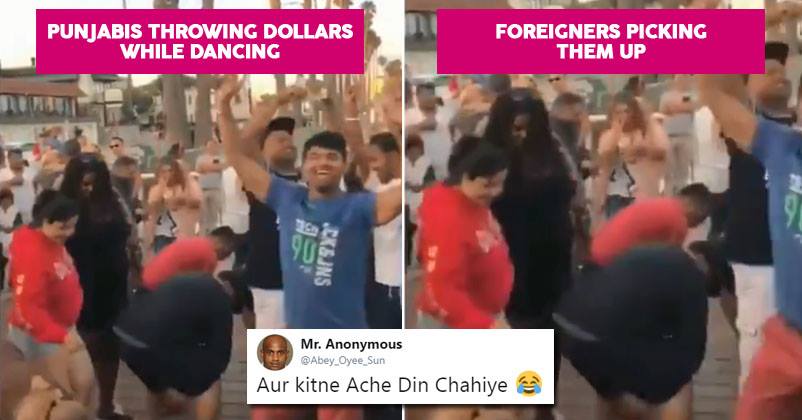 Punjabis have lot of “Josh” in them. The moment they hear some loud music, they start dancing like crazy and enter a new world altogether.

Whether it’s a Punjabi function or whether it’s a high-profile wedding, one thing that has to be there is dhol & Punjabi songs. We have even seen them showering notes like a mast-maula.

If you have ever been to a Punjabi wedding, you must have seen the way they enjoy the money-rain.

We have come across one more such video where few Punjabi boys are dancing on music and are throwing dollars all over. The video has gone super-viral and in that, we can see how foreigners are grabbing those notes.

People are having a great time watching that video; it is spread like wild fire and we have some best Twitter reactions too.

Punjabis throwing dollars while dancing and firangis picking them up 😂 🤣 pic.twitter.com/BL0AIu9PC1

And as soon as Twitterati saw this video, they went mad and gave hilarious reactions..

Now this is the acchhe din…

Haha, we could never imagine foreigners picking up money like this. How did you find this video?

Continue Reading
You may also like...
Related Topics:dollars, Punjabis

Raghu Ram Got Engaged To This Canadian Girl. Engagement Pics Are Beautiful
Arjun Tendulkar Spotted On A Lunch Date With The Woman Cricketer Who Proposed To Virat Kohli