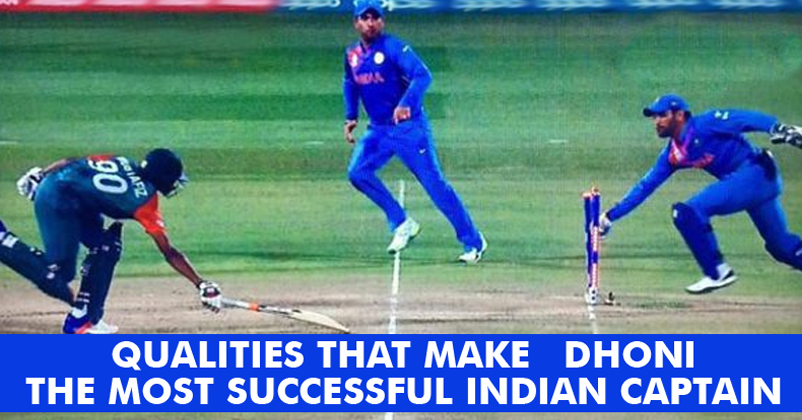 M.S Dhoni is one of the most successful captains in the history of cricket. He shocked everyone in the cricketing world with his brave attitude and cool behavior in extremely tough situations. Let’s have a look at some of the qualities which made him successful. Many of us are either trapped in our past or keep worrying about our future. MSD always tries to be in present; that is one of the qualities that made him what he is today. Presence of mind is the another key to success. No matter which profession you are in, it’s very crucial how well and how quickly you react to a particular situation. MSD is always very focused and mentally prepared for any situation during the match. Who can forget that famous run-out against Bangladesh in T20 WC game. Other wicket keepers may have had a shy at the stumps, but MSD removed his gloves prior to final delivery and became Usain Bolt to tear apart the stumps. That’s the greatest example of his presence of mind.

Temperament is the thing that most of the people lack in. People lose their calm easily in adverse situations and then there is MSD, who is completely opposite. “Dhoni has got this ability of rising from the ashes. It is his temperament where he has treated those two imposters – fame and failure – in just the same manner.” -Sunil Gawaskar

4. Out Of The Box Thinking Dhoni is famous for his out of the box decision making capabilities. He thinks in a different manner. Former Pakistani legend spinner Saqlain Mushtaq once told an incident while doing commentary along with Kapil Dev, Wasim Akram and Rahul Dravid. They all were talking about some strategies that MSD should adopt on the field, but he was making completely opposite decisions and India won the match easily. He is very consistent and honest towards his work. He has many haters in his own country. They always say he is just a lucky guy. But they should know that no one can crack JEE without studying. You may be lucky one or two times but the records of MSD show that he is the most consistent performer in the game of cricket. Average of over 50 and strike rate of over 90 is enough to prove his consistency..

It was because of these qualities that Dhoni was considered to be the best captain!

Ashwin Didn’t Mention Dhoni’s Name In Thank You Speech! Twitterati Angry At His Arrogance!
Good News For All Kings XI Punjab Fans! Sehwag Might Soon Return To The Team!