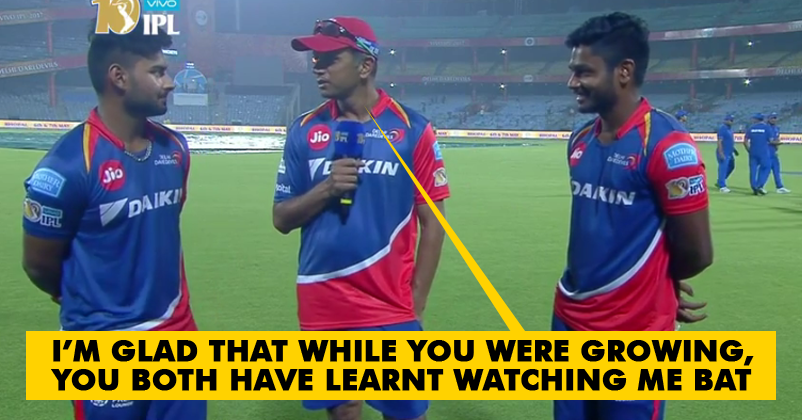 Team Delhi Daredevils had an amazing victory over Gujarat Lions on Thursday; thanks to the excellent batting attack of Rishabh Pant and Sanju Samson who scored 97 off 43 balls and 61 off 31 balls respectively.

Rahul Dravid who was in jovial mood, had an interaction with the boys post the victory and was seen cracking the jokes on his own abilties.

Rahul Dravid who happens to be the mentor of Delhi Daredevils appreciated their performance and said,

“I’m glad they haven’t been watching too many videos of me batting when we need 208 in 20 overs.”

Well, that was hilarious coming from Rahul himself. Even though he is one of the most respected former Indian Cricket Players and had a long International career, still he is so humble. This attitude makes him a beautiful human that he is.

“It was really impressive for me as well with Rishabh batting on 97, not thinking about his hundred at that stage and still going for the shots and playing his shots and not worrying about the hundred and looking to get the team home. So, incredible innings from the two boys… Truly well-deserved and as I’m a hard taskmaster I hope you’ll finish the job next time and stay not out,”

Check out the video; What do you think about it? Leave your thoughts in the comment section.

Troubles For New Jersey! RSS Wants Cancellation Of Deal With Oppo Because Of This Reason!
Sunil Gavaskar Slams Virat Kohli And Asks Him To Look In Mirror. Here’s Why