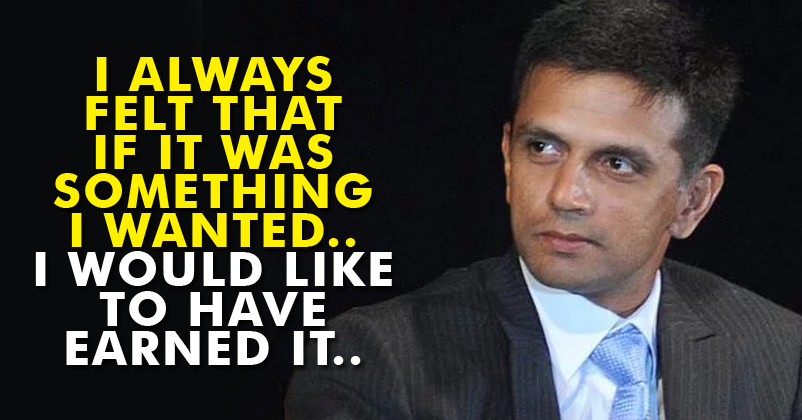 Rahul Dravid is a man of honor, class and sublime nature. His experience and words of wisdom are a joy to listen. His views on different topics always make sense and are very sensible. His vision helped India to climb and clinch various victories and cross big milestones. Only a few in this big world would hate him for the things that he does the best that are apparently loved by all of us. His contributions for the future of Indian cricket and more over to the world of cricket is immense and thus, this indeed made everyone respect him and his efforts. And for this, Bangalore University honored him with a Doctorate Degree. However, surprisingly Rahul Dravid declined the Doctorate Degree as he wanted to earn it by doing some actual research on that particular field. Needless to say, he had set an example for everyone and was soon in the news for this particular reason. Everyone started talking about it. But in order to settle the winds of rumors and gossips, Rahul Dravid has come up where he stated the reason for such a thinking.

Recently, The Indian Express conducted an interview of Rahul Dravid where they asked him about the recent incident. The question was – You say no to an honorary doctorate degree and are built up to be this pillar of virtue. Did you sit back and wonder why people made such a big deal of it?

Rahul Dravid took his time and replied, “The thing about the doctorate is that my mom did her PhD and earned a doctorate at the age of 55. My wife’s a surgeon who studied seven years to get a degree in surgery. And I’ve always felt that if it was something I wanted, I would like to have earned it.”

Well, that was indeed an answer worth of million claps and admiration. His opinions clearly tell us about how he perceive things in life. It’s not the easy way that he chooses but the honest one. He further went ahead and said, “I don’t mean that anyone else should have that feeling and I’m not trying to belittle anyone else. It’s just that I felt that way because of my own experiences. And it’s not the first time that people have asked me to become a doctorate. It’s just that it’s happened privately and over an email exchange. And before it’s been announced, I have declined it politely even then. It so happened that this unfortunately came out in public.”

Not only he made his stand clear but also clarified that he doesn’t mean to force anyone else to follow his path. He emphasized that everyone has the right to make their own decisions.

This Girl Charges 5K per night To Do This On Men’s Beds! No It’s Not What You Are Thinking
8 Misconceptions About South Indians That Are Completely Ridiculous!