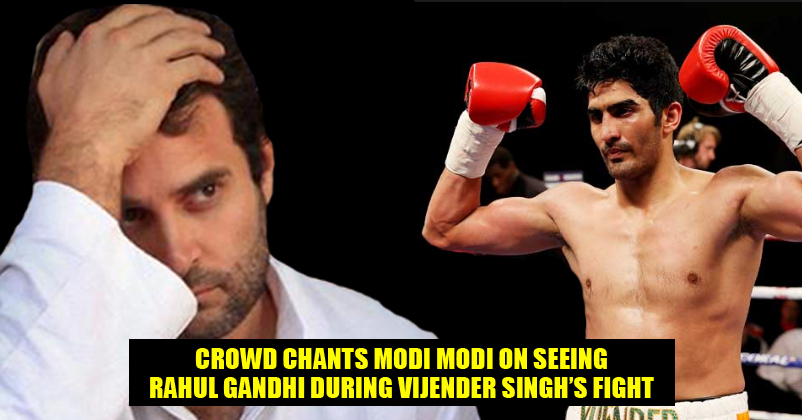 Time and again poor Rahul Gandhi is trolled on social media. No matter whether he reacts or not, it does pinches him somewhere deep inside his heart. Yesterday was a no exception. A happy and energetic Rahul Came in to the Thyagraj Stadium with a fresh mind to catch the fight which every Indian was waiting for so long. VIJENDER SINGH VS KERRY HOPE.

He sat next to IPL Chairman Rajiv Shukla. Although his small journey from the stadium gate to his reserved seat was not so comfortable. He was continuously booed by the spectators where they were chanting ‘MODI, MODI’. In the following video you can also hear many people teasing him by saying ‘PAPPU’.

Even Rajiv Shukla, faced a similar experience when he walked out of the Thyagraj stadium after the end of the fight which Vijender won after beating Australia’s hopes, Kerry Hopes.

Well, the crowd was for sure expecting something from Rahul Gandhi in the name reaction, but he did maintain his calm or more precisely ‘Kept Quite Like Always’. He just turned around and waved at the spectators.

The event was attended by a whole pool of celebrities from the Entertainment Industry as well as from Politics. M.C Mary Kom was among the one who acknowledged the crowd for supporting Boxing Game and coming in such a big number. Many celebrities like wrestler Yogeshwar Dutt, cricketers Virender Sehwag, Yuvraj Singh and Suresh Raina and actors like Randeep Hooda and John Abraham also showed their support for Vijender Singh.

The 30-year-old Indian boxer Vijender Singh took all 10 rounds to systematically defeated the 34-year-old Australian boxer Kerry Hopes and maintained his record of consecutive wins without any loss in his professional career.

He later added by saying “It’s not about myself, it’s about my nation, my country,” ‘Sultan’ 11th Day Collections Are Out! Once Again No Comparison With ‘Great Grand Masti’ Collections!
Things You Need To Know About The Gorgeous AT&T Ad Girl