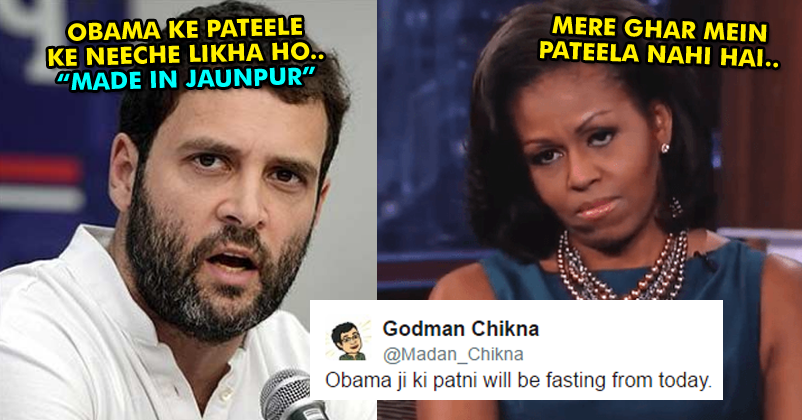 Many a times it so happens that Rahul Gandhi passes some statement and it becomes a joke on social media. Yes, as soon as he says something, social media users are quick enough to troll him to the core; be it his potato factory comment or be it his hatred for Modi, Rahul’s statements are always a hot topic of discussion. Recently, he grabbed a lot of attention by passing an absurd remark about Barack Obama’s wife, Michelle Obama. This time, Rahul was addressing a rally in Jaunpur and he talked about how he wants to make UP the manufacturing hub of the world.

While talking about it, Rahul targeted Michelle Obama and passed the statement

He also talked about mobile phones from UP being available in the US, 5 years from now. Rahul Gandhi once again became the butt of jokes; want to watch his funny video? Check it out right away:-

This remark on Michelle Obama invited lots of trolls on Twitter. Twitterati just couldn’t stop slamming and making fun of Rahul Gandhi; check out their reactions….

When Obama lifts this pappu!

Obama ji ki patni will be fasting from today. https://t.co/5AVy025lFm

How sexist!
And hilarious. https://t.co/G3wmHdvkJW

Seriously dude Why would I buy bed-sheets and Patila from Uttar Pradesh? pic.twitter.com/lcybbca2rH

Lol, the tweets are so funny; it seems Rahul Gandhi needs to learn how to deliver good speeches, isn’t it? Do share your views about this in our comments section below.

Girl Was Blamed For Hitting Boy Who Snapped Her Bra. This Is How Her Mom Taught School A Lesson
Reliance Invested Rs 10 Crores In Paytm In 2010. Profit It Earned By Selling Stake Now Is Amazing