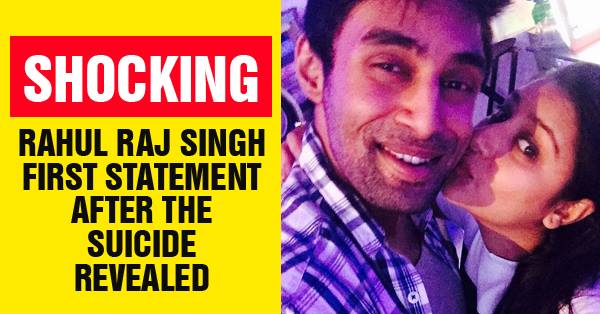 Since the time Pratyusha Banerjee’s suicide news broke, the industry friends have been pointing out at Rahul Raj Singh, her boyfriend. Her industry friends immediately reached Kokilaben Hospital after they heard the shocking news. TV stars like Gurmeet Choudhary, Dolly Bindra and Sara Khan told the media yesterday that they tried contacting her boyfriend but his phone was off. He wasn’t seen at the hospital too. As per reports, officials of Mumbai police stated that Rahul’s 1st statement has been recorded. Rahul was the 1st one to see her hanging!

This 1st statement of Rahul on the suicide of Pratyusha Banerjee went viral. As per reports, he was the 1st one who saw her hanging from the ceiling. After that he immediately informed the neighbours and her family. He was the one who got her admitted in the hospital. So here is Rahul Raj Singh’s statement:

Have a look at his statement

“We used to stay in a 2 bedroom flat. We had two keys; one key was with Pratyusha and another with me. When I entered the bedroom, I found pratyusha hanging to the ceiling. I got very scared. Immediately, I called the neighbours n with their help, I took her to Kokilaben hospital.We assumed that she was alive…but she was not.I got so scared that I did not inform the police. It was the hospital authorities who informed them. After the doctors declaration, I called up Pratyusha’s family members n few of our close friends.”

What Pratyusha’s industry friends have to say!

Pratyusha’s industry friends state that it was a ‘Planned murder’. A video has been shared wherein the guard reveals how Pratyusha and Rahul used to quarrel. Have a look at the video:


Several questions have been raised about her death. It is stated that some marks were seen around her neck and some bruises were seen on her face. Stay tuned for updates!