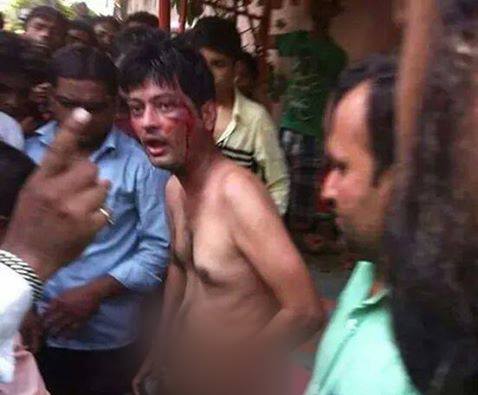 Indian man, 40 year old Suresh Kumar tried to rape a teenager girl. Some group of men were passing nearby and heard girl screaming for help. They noticed that a guy (Suresh Kumar) was trying to forcefully rape a little girl. Mob not only saved the girl but took the man to a local butcher shop where he was beaten with sticks for more than an hour. Even after beating the man badly, mob felt that this man deserves more. They were so much angry that they cut his genetical organ off with a meat cleaver and thrown the genetical organ in the middle of the road. The man was bloodied, bruised and unconscious but no one was willing to show any kind of mercy.
Witness Aamir said that “No one went to help the man because they could see his private organ on the ground and knew this was punishment for a sex crime”. “We have had a lot of intolerable offenses against women in this country recently, with girls being raped, hung, and molested, and it’s time it stopped,” Dhawan said. “This sends out a very strong message to anyone like that – if you do it you will be punished.”

Police are asking for suspects to come by themselves because they say, we can’t allow citizens to decide the fate of a criminal. In India, only Court has power of deciding the fate of criminal. Police said that they will take an action on those who were involved in cutting the genetical organ of Suresh Kumar.

“As deplorable as these crimes are, law and order has to be maintained, and not lynch justice,” said a police spokesman. “We ask those men who carried out this attack to hand themselves in before we find them.”

Please let us know in comments what are your views about this incident?
Did the crowd do the right thing or they should have handed him over to the police?