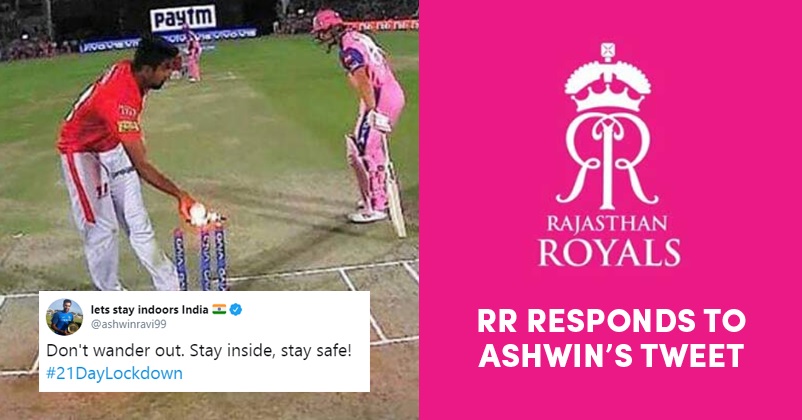 The coronavirus outbreak has forced each one of us to stay at home if we want to save ourselves from the lethal virus which is contagious in nature. The Indian cricketers and Bollywood celebs are making a good use of social media networks by spreading awareness about the disease and requesting their fans and followers to listen to the government and the medical authorities.

Recently, Indian spinner Ravichandran Ashwin took to the micro-blogging site Twitter and made a tweet in which he also referred to the mankading episode which took place in the IPL match played between Kings XI Punjab (KXIP) and Rajasthan Royals (RR).

At that time, Ashwin was the skipper of KXIP and he mankaded RR batsman Jos Butler when the latter was out of the crease even before Ashwin threw the ball. Ashwin was criticised a lot by many fans and former cricketers as well for going against the spirit of the game but it didn’t affect him as he said that he did the right thing and he will do it again if he gets a chance as it is with the laws of the game.

Ashwin posted that tweet on the first day of lockdown, asking everyone to stay inside and stay safe. He posted a photo in which he is seen mankading Jos Buttler and his tweet read,

“Hahaha, somebody sent me this and told me it’s exactly been 1 year since this run out happened. As the nation goes into a lockdown, this is a good reminder to my citizens. Don’t wander out. Stay inside, stay safe! #21DayLockdown”.

Hahaha, somebody sent me this and told me it's exactly been 1 year since this run out happened.

As the nation goes into a lockdown, this is a good reminder to my citizens.

While Ashwin posted this tweet in a good spirit, the official Twitter handle of Rajasthan Royals responded in a sassy manner, “How to keep distance from memories during a #21daylockdown?”

How to keep distance from memories during a #21daylockdown? 🙈 https://t.co/GIQbX6bsqv

The coronavirus outbreak has been declared a pandemic by the World Health Organization and this virus which originated from China has taken lives of more than 24,000 people worldwide while over 5.5 lakh persons have been found infected with it.

We sincerely request our readers to stay at home and stay safe!