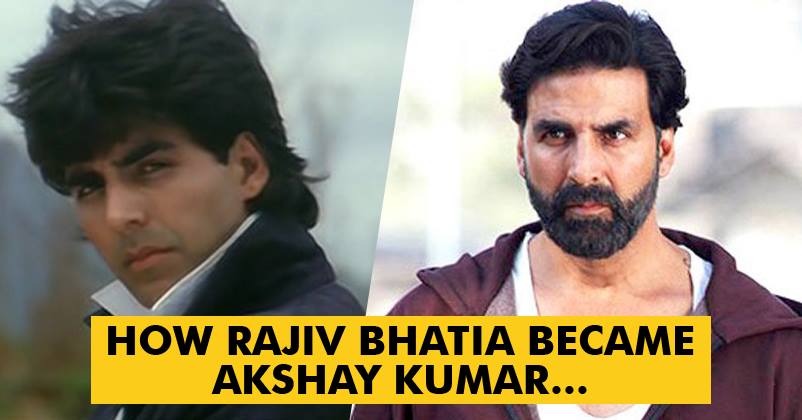 If there is someone who can define words like ‘Perseverance’ and ‘Discipline’, then Akshay Kumar is probably one of the finest piece of example that we can have among us. From being a chef working for Rs 1500 to a Bollywood superstar owning net worth of $150 Million i.e around 900 crores, Akshay Kumar has definitely set the benchmark for words like ‘SUCCESS’. There are indeed many people who call the results of such HARD WORK as mere luck. And they have enormous reasons to back their ‘LOGICS’. Some stress on numerology, while some crack various pots of horoscope. The most obvious ones are the people who crack the meaning of someone’s NAME.

Many people believe that AKSHAY KUMAR’S Bollywood journey began from his first appearance as the lead actor opposite Raakhee and Shantipriya in Saugandh (1991). But surprisingly, it is the Mahesh Bhatt’s movie ‘AAJ’ (1987) where Akshay Kumar made his first ever appearance on silver screen. Can’t recall ? Remember that karate instructor in the movie ? Anyway, he was in the movie for barely 10 seconds. But this movie will always be the special one for him as it is this is the very movie which gave him his name – AKSHAY KUMAR. Before this, his real name was Rajiv Hari Om Bhatia. Yes, surprise, surprise ! ! ‘Akshay’ was the name of the character played by Kumar Gaurav in the movie ‘AAJ’ where he was in the lead role.

Rajiv Hari Om Bhatia (Akshay Kumar) liked Kumar Gaurav’s character name,’AKSHAY’ so much that he decided to adopt it as his official name. Although, he loves his original name ‘Rajiv Hari Om Bhatia’, he still prefers ‘AKSHAY KUMAR’ as according to him, this name suits his personality in a much better way. Damn, I am seriously getting confused in writing this article. I met Akshay in 1985. In those days, he was called Rajiv Bhatia. He looked different from now — he had a mustache and long hair. He was taking dance and acting lessons from (actress) Madhumati. I never thought he would become an actor then though he was good looking and a good dancer. But he was not like a hero

Jayesh Sheth was one of Akshay’s close friends who helped Akki find a foothold in Mumbai.

No matter what was, is or would be his name, it is his acting skills and talent that made him what he is today and not his NAME. What are views about this ? Share your opinion in the comment section below.

5 Reasons Why Aamir’s Dangal Looks More Promising & Better Than Salman’s Sultan
KAABIL’s Astonishing Teaser Will Make Your Wait Difficult For The Movie! A MUST WATCH!