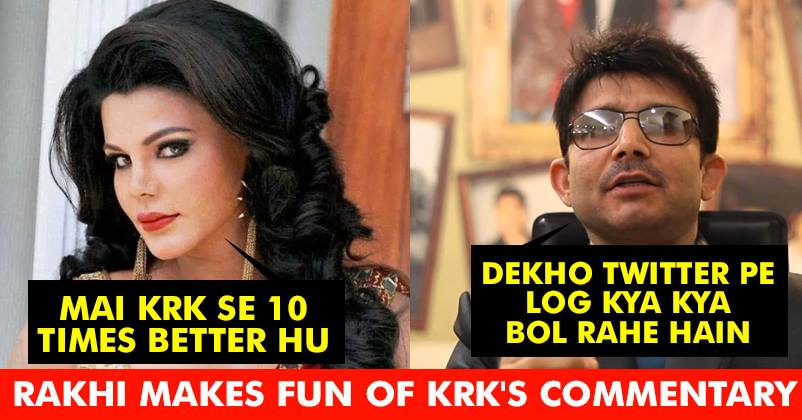 The media’s favorite and controversies favorite child, Rakhi Sawant is back in the news for again something unimportant but hilarious.

She mocked the another social media character, Kamaal R Khan for his cricket commentary during an IPL match. Well, she wrote on her Facebook and declared that she could have done the commentary 10 times better than KRK.

The post read, “Yeh kaisi commentary hai?? Kuch bhi bologe matlab. I can do 10 times better than KRK and teach him too.”

Her post went viral on social media and people started hashtag #RakhiKiCommentary. The actress and attention seeker hit the bull’s eye quite successfully.

The Twitterati slammed her and trolled her like never before.

When someone literally thought of leaving the planet

You know it's time to leave the planet when jackasses like #RakhiSawant & #KRK think they are smart enough to be commentators. pic.twitter.com/XD3ulKggit

Comparing one caricature to another

Some thought she is being her usual self

Commentary & Rakhi Sawant ! Is it a joke guys ?
Drama queen again trying to make a noice of drama & in full on mood to quarrel with KRK

Some actually wanted it to happen

Now, I am ready to listen Rakhi Sawant's commentary in the IPL RakhiKiCommentary https://t.co/k9kW2kLD5Z pic.twitter.com/SSKeuVOZZT

Sarcasm was always a part of epic trolling

Boycotting can help us be safe from Rakhi Sawant

While we are at it,can we also boycott Rakhi Sawant? No she didn't do anything. Just for the sake of it.

To make a point from something that is unimportant

Some people were actually praising her

Rakhi Sawant surely has guts to take up something as challenging as commentary RakhiKiCommentary pic.twitter.com/axP40fSbMD

Will like Rakhi Sawant as a commentator for IPL match? Let us know in the comment section.

This Parody Song Of Ed Sheeran’s Shape Of You Is Breaking The Internet! You’ll Feel Like Dancing
Baahubali 2 Review: You Won’t Be Satisfied By Watching It Just Once! It Will Break All Records!