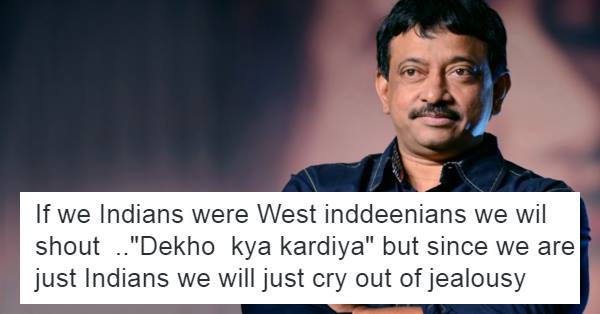 Well, it seems everyone other person in the country is capable of playing cricket better than the 11 players in the blue Indian Jersey. One of the person is filmmaker Ram Gopal Verma who never misses a moment to spew venom against Indian Cricket Team or BCCI. Be it last years World-Cup Semi-Final loss to Australia or this years T20 World-Cup Semi-Final Loss to West Indies.

Yesterday after India’s defeat, the controversial filmmaker rolled out on a distasteful tweeting spree and degraded Indian Team and Board for not winning the match.

Here is the start…

11 among just 4 cr population of West indies won Indians who dint even have a 11 in 125 cr population ..This is about David fucking Goliath

In a sarcastic manner, he criticized the board for not producing better players like West Indies

If we Indians were West inddeenians we wil shout .."Dekho kya kardiya" but since we are just Indians we will just cry out of jealousy

As if it was not enough for him, he questioned India’s integrity while comparing India’s population to West Indies’s

On the very end, he tells everyone what he loves and what he doesn’t

I love West Indies more than India because more then region,religion and caste I love true worth

Well, its sad how national celebs come forward to kick the team of 125 billion people just when they are down and needs support the most.

Whats your take on the matter. Let us know in the comments section below.