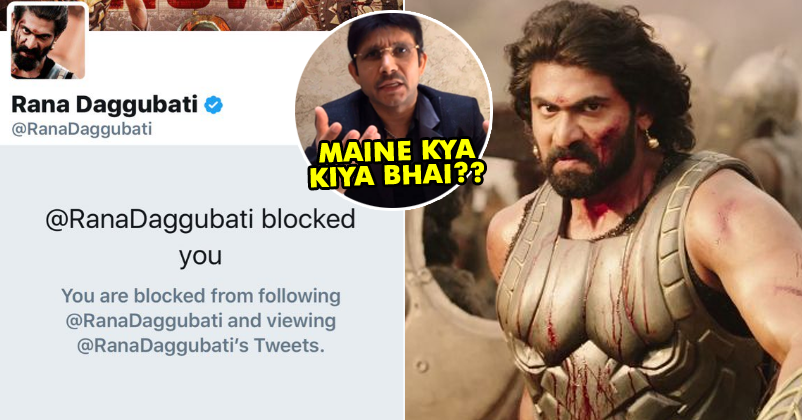 When the world is not getting enough of Baahubali 2 and simply loving it, KRK says he didn’t like it. Fair Enough! But then he started with his usual bashing, of course, he needed attention. But then he tweeted that Rana Daggubati blocked him for bashing Baahubali 2.

“I never followed this idiot neither tweeted about him till date. Still he blocked me to prove that he is brainless.”

Now, this became the news and Rana Daggubati decided to respond appropriately. His truthful reply will make you feel like clapping as he totally exposed KRK.

Here’s what he said –

Blocked that bloke almost a year ago!! 😂😂 https://t.co/26IySsZtqU

Now that’s what we call a Thug Life!

But KRK didn’t stop and replied,

“See @Me_Prabhas has got 88 thousand n @RanaDaggubati has got 2.6 million followers means these both Lukkhas are not equal to #TheBrandKRK!”

What do you have to say on this whole matter? Do you have something creative to tell KRK? Write in the comments section.

5th Day Collections Of Bahubali 2 Are Out! Hindi Version Is All Set To Enter 200 Crores Club
Firangi Actress Ishita Dutta Reveals How Kapil Behaves On The Sets! You’ll Be Surprised!