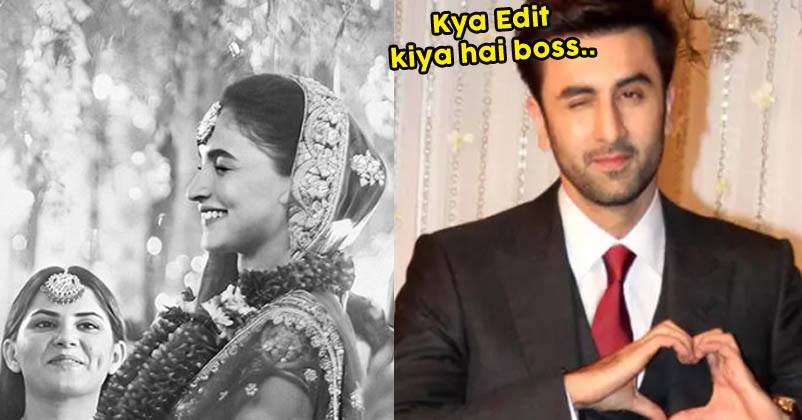 Ranbir Kapoor and Alia Bhatt are one of the most talked about couples of B-Town and there are rumours that they both are going to tie the knot pretty soon. However, there has been no confirmation in this regard from either of them and their family members have also chosen to remain mum on this matter.

Ranbir and Alia are working together in a movie “Brahmastra” which is being directed by Ayan Mukerji and also stars Amitabh Bachchan in an important role. It is being said that they both came closer during the shooting of the flick and now they are crazy for each other. They can be seen together at every event; just recently they looked soaked in love when they attended Ganesh Chaturthi celebrations at Mukesh Ambani’s residence and presently, they are having a gala time in Kenya while enjoying their vacations.

The fans of both the stars also want to see their favourite pair getting married but one of the fans seems to be in too much of a hurry. Yes, you read that right!

A fan edited a photo from Alia’s bridal shoot and pasted Ranbir’s photo on the face of another model who was dressed up as the groom.

In recent times, Alia has been roped in by an ethnic fashion brand and her bridal shoot was loved by her fans. This photo is from the same photoshoot and it is being loved by their fans.

Here is the photoshopped wedding pic of Ranbir Kapoor and Alia Bhatt:

They look adorable together, don’t they?

Virat Kohli Finally Revealed Why His Wedding With Anushka Sharma In Italy Was So Confidential
Vidyut Jammwal Is Working Out With Cylinder In This Video, Make Sure Your Mom Doesn’t See This