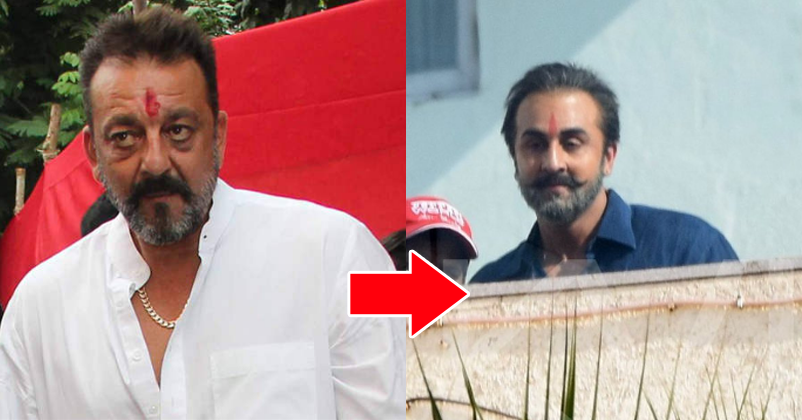 Ranbir Kapoor has donned the Sanjay Dutt avatar in his biopic; we were doubtful if Ranbir would do justice to Sanju Baba’s role, because the latter’s machismo is incomparable and impossible to imitate. Basically Ranbir is a “Chocolate boy” who is known for his cuteness and soft nature and essaying Sanjay’s role was a contrast. However, some pics from the sets are out and they have convinced us that Ranbir is perfect for this role.

Currently, the 1st part of the movie is being shot; Ranbir is portraying older Sanjay Dutt and his makeover has surprised us. The pictures have doubled our excitement for watching the film.

Reports say that Ranbir would be seen in 6 different looks in the biopic and this is definitely a TOUGH job.

The photos also highlight a fact that Ranbir is giving 100 percent to his role; want to check out his pics? Have a look at the similarity… Earlier too, some pics of Ranbir were leaked and he looked “Ditto”! Check out… This transformation is phenomenal and we appreciate him for the efforts he has put in. Even Sanjay Dutt will love to see Ranbir this way. What’s your take on this?

This Time Ranveer Singh Did The Impossible! He Didn’t Wear Shoes With The Suit!
The Transformation Photos Of Kim Kardashian Before And After Surgery Are Unbelievable!