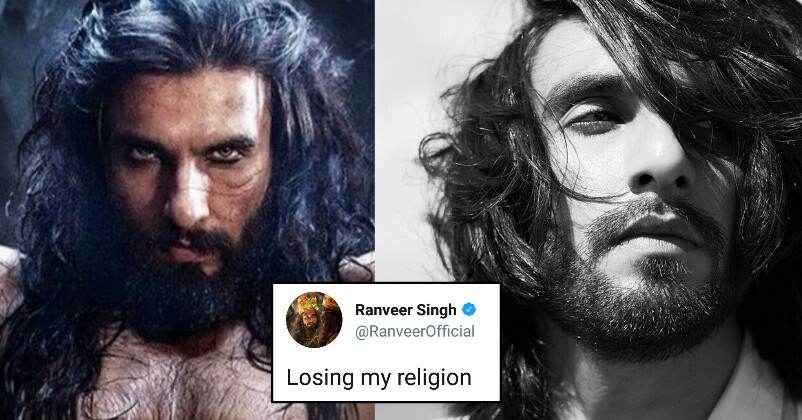 Ranveer Singh is gearing up for his next release “Padmavati” and is keeping us updated with every pic he can. Be it pictures from the set or be it pictures of himself, he is posting it all.

We all know how social media can spark controversies, especially with regards to Bollywood actors. Yes, they are always at the receiving end and keep getting shamed for their inappropriate posts. This time, it’s Ranveer Singh who is being trolled for his recent pic.

Yes, he uploaded a new picture of himself yesterday & got brutally trolled for the same. Well, this black & white pic was captioned “Losing my religion”, and this was enough to stir a new controversy. Well, we are clueless about what he means by this caption. Is there any connection between Padmavati and this caption? We too are waiting to get the answer to this as it has left us confused!

Few days back, he wrote on Twitter, “Stung by a bee for the first time” and people were quick to relate it with Ranveer-Deepika’s breakup; this time, people are again trolling him for this word “Religion”. Check out his tweet;

And this is how he got trolled by Twitterati;

He did it deliberately to get more controversies for the film, not good time for such posts

Do not be afraid, you do not have religion, so you can not lose religion.

These words were not needed!

These words were not needed at this time. This tweet could have been worded differently.

Actors are not only acting in reel life but in real life as well. Why don't you convert your religion and prove it before making all these controversial statements? Garnering cheap publicity for his upcoming film.

Actors can do anything!!

Let’s wait to hear from Ranveer himself, instead of judging him and jumping to conclusions. The meaning of his tweet can be anything!

Continue Reading
You may also like...
Related Topics:Ranveer Singh, Religion