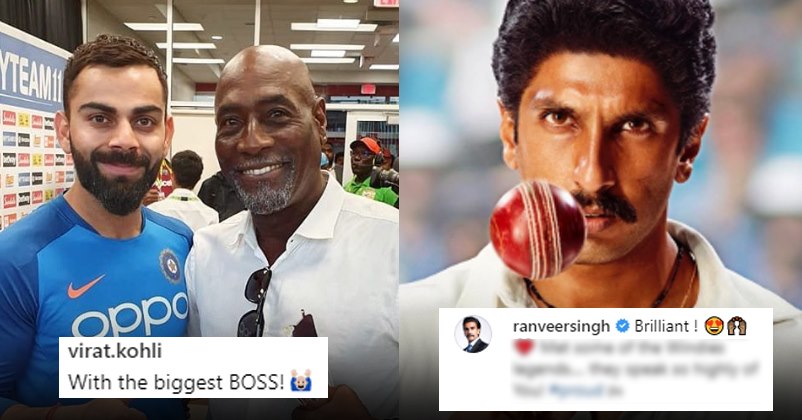 The Indian cricket team is in Miami currently for ongoing India vs West Indies tour. The team is playing well and Indian skipper Virat Kohli also seems to be in his full form. Recently he got a chance to meet former West Indies cricketer, Sir Vivian Richards. For Virat, it was not less than his fanboy moment and he didn’t fail to capture it and share it on his Instagram profile.

Virat clicked a picture with Richards with a big smile on his face. Sharing the picture on his social media handle, he wrote,” With the biggest BOSS!”

With the biggest BOSS! 🙌

Virat’s post instantly grabbed mass attention and people started liking and commenting on it. Meanwhile, Bollywood actor Ranveer Singh also posted a comment of Kohli’s post. Praising Richards, he wrote, “Brilliant! Met some of the Windies legends…. they speak so highly of You! #proud.”

The Indian team could not win the world cup trophy this year and had to leave the game after losing to New Zealand in the semi-final. But in spite of that the team has been garnering appreciation and love from the fans.