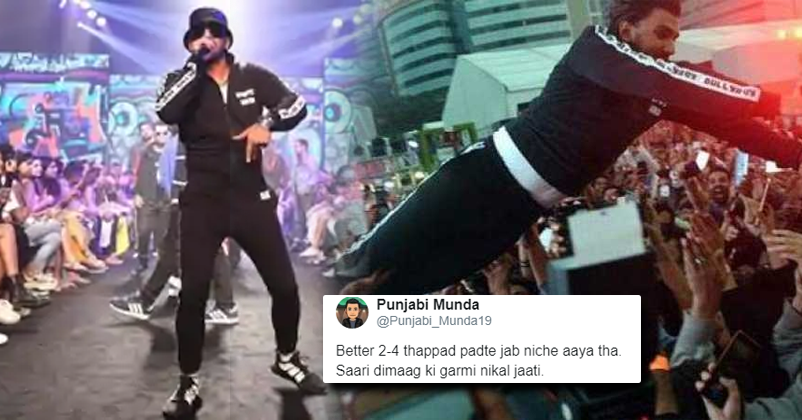 Ranveer Singh, whose Gully Boy is all set to release on 14th February, is going out of his way to promote the film. He was recently at the Lake Fashion Week in order to close the event.

As usual, Ranveer was his chirpy, quirky energetic self at the event. Now so far his antics have been pretty harmless. However, things took a turn for the worse at the event.

Ranveer suddenly dived into a crowd of fans who had been cheering for him near the stage. Now ordinarily, they would have caught him, but since it was unannounced, this resulted in a chaos.

In fact, someone shared a tweet which had a newspaper clipping showing a few women were also injured.

This has left a lot of people furious and they’re saying that Ranveer should now grow up. Check out what they have to say:

Can any common man jump like this? It would be crime. Now its okay bcoz its #Ranveer! Not fair, this is childish & foolish act, he need to grow up. Such incidents can lead to disasters like stampede.

Someone’s gotta shoot him with a tranquilliser

I called it as chutiyapan .. a senseless act by ranveer. Grow up.

People should have kicked his ass. Seriously. You weight what, more than 200 pounds and you jump on people, hurting them. Dude have some common sense man. You could have hurt someone in a serious way.

Someone has apparently notified him of the negative reactions to his antics, and he even replied, as you can see:

So i sent Ranveer some DM's about the negative reactions to the crowd dive and what he said at the music launch, and he replied back with this message, he acknowledges what happend and wat he did and he said he will be mindful in the future. Thankyou for the reply Ranveer ❤️ pic.twitter.com/VAzBtqstRp

What do you think of his high josh? Is it too much? Share your opinions with us!

Kangana Ranaut Lashed Out At Sonu Sood, Says He Has No Right To Talk About Manikarnika
Vidya Balan Says ‘F*ck You’ To People Who Ask Her To Exercise, Reacts To Being Called Fat