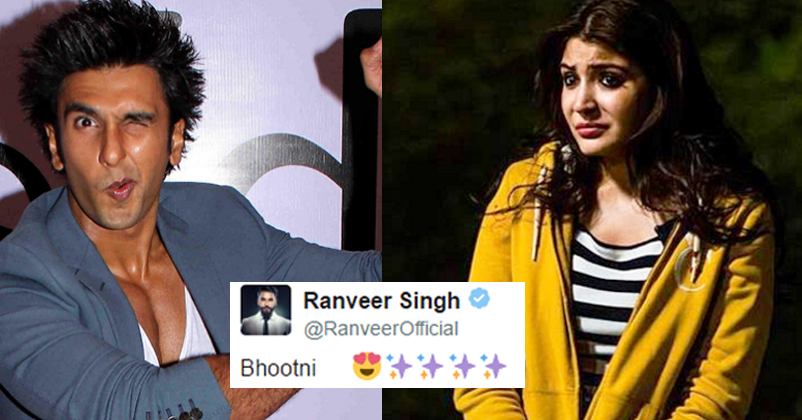 No matter what is the news, the name Ranveer Singh always pops up in every single chapter. His energetic attitude and positive vibes always make him wanted. Recently Anushka Sharma released her home production’s trailer ‘Phillauri’ where she is seen acting like a ghost, (spirit to be precise). People seem to like the trailer as it has already crossed the 5 million viewership mark on youtube within less than 24 hours. Along with her, the comedy-drama trailer also stars talented actors like Diljit Dosanjh (playing Anushka’s love interest) and Suraj Sharma of the ‘Life Of Pie’ fame. The trailer has managed to get great appreciation from the rest of the Bollywood and it seems like the movie is going to be a superhit.

Having said that Bollywood is indeed liking the trailer, Ranveer Singh expressed his emotions on his twitter account and showed his desires to watch more of it in the trial of the movie. However, what caught the attention was his friendly banter and love for Anushka Sharma where he called her ‘Bhootni’. Here is what he tweeted. Well, this is the first time that A ‘Bhootni’ looked so cute. Anushka Sharma indeed looks super fresh and the concept of the movie is also nice. Anushka Sharma responded to his message with a simple tweet. Have a look at it.

Meanwhile, the participants of this sweet twitter chat weren’t limited to just two of them. Various celebs got into it and it was a complete sugarpie.

Well, we have indeed watched ‘PAHELI’

I LOVE this trailer!!! it tells a story that you want to know all about! #Phillauri https://t.co/ZIVyIQ6P41 @AnushkaSharma @diljitdosanjh

It was indeed a delight to watch the trailer.

It is always a great sight to watch the Bollywood fraternity sticking together and appreciating each other’s performance. But it was the sweet banter between Ranveer Singh and Anushka Sharma that stole all the limelight. What are you views about it? Please share your opinion in the comment section below.