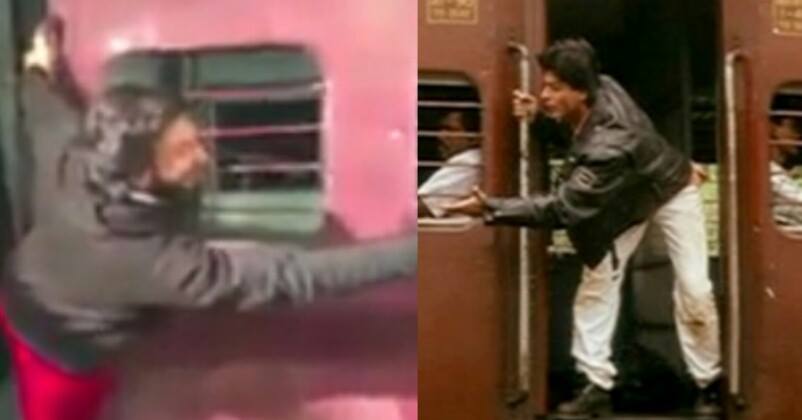 Ranveer Singh is known for his carefree attitude ever since he made his debut back in 2010. Ranveer doesn’t mind taking a day off and enjoying himself while at work. He has a character that can charge up even the most boring people. To keep with that image of himself, Ranveer has posted a video on his twitter handle that is sure to give you a fun time.

Ranveer, who is currently busy shooting for Sanjay Leela Bhansali’s Padmavati, managed to take some time off to come up with an interesting video. Ranveer paired himself up with choreographer Ganesh Acharya and shooted an epic video trying to replicate the memorable climax of King Khan’s Dilwale Dulhaniya Le Jayenge. Not just that, the caption for the video was even more hilarious. Ranveer captioned the video with, “This stunt is performed by trained Filmys. Do not try this at home. Or at the train station.”

This is the video that is sure to give you an ample dose of laughter!

This stunt is performed by trained Filmys. Do not try this at home. Or at the train station.
❤🚞🚞🚞🚞🚞😮 pic.twitter.com/BKrFl8fVxF

This is just what Ranveer’s fans would have wanted from him. This is how his fans reacted to his lovely video!

Ranveer u r too cute! Love u! Plz keep tweeting all these pics and fun videos 🙂

Ranveer and his attraction for the 90’s Bollywood is something that we all just love to see. Ranveer keeps making his fans go crazy with his off-screen fun every now and then. He recently danced on the tunes of Akshay Kumar’s Hookah Bar and matched Akshay step-to-step. Back in the past too Ranveer has been seen mimicking Bollywood actors and spreading the fun that he always does.

Not just Ranveer’s onscreen acting skills but his off screen attitude too has won him so many fans. Do let us know how much you enjoyed this video from Ranveer in our comments section below.