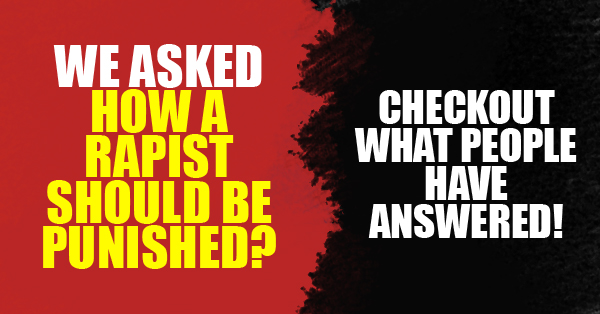 According to National Crime Records Bureau of India, Rape is considered as the 4th most common crime against women. Shockingly, 24,000+ rape cases were reported across the country in the year 2012. It all started with the inhuman act which took place in the capital city few years back, from then on there were many campaigns and rallies which took place asking Governement to make amendments in the law for Rapists. As a result “Nirbhaya’ act came into the constitution, however that didn’t bring down the rape cases. There should be some severe punishment for this inhuman acts.

Rajnikant V/s CID Jokes asked its users – “How should RAPISTS be punished?”. The post gained attention as it got more than 1000 likes and 1000+ comments. Users commented their heart out. There were diverse categories of comments. Some of them made fun, trolled, others suggested some serious punishments. We compiled some of the best comments from over 1K.

@RVCJ_FB Indian govt cant punish Rapists bcz they knw the Indian Girls
You remember Sarabjit Case?
Anyone can file a false report
What then?

@RVCJ_FB cutting their heads off

Continue Reading
You may also like...
Related Topics:"How Should RAPISTS Be Punished?", comments, Facebook, Here Are The Honest Answers From RVCJ Users..!!, Punishment, Rape, Rapists

Cannot Afford An IPhone? Why Not Sell Your Baby? Confused? Well Read To Know What This Couple Did!
Unbelievable! Judge Asks Rape Victim If She Tried “Closing Her Legs”