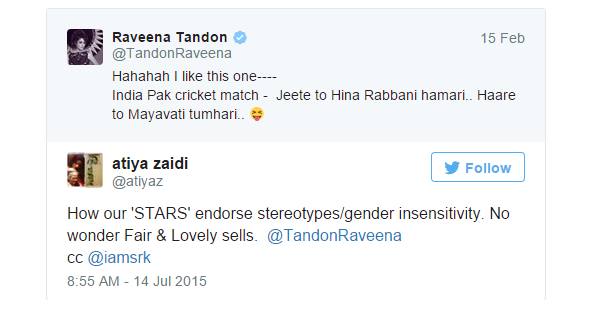 There is no denying the fact that social media has become a major platform through which people explicitly share what they feel about anything, be it applauding or criticizing somebody or pointing out fault in something. And this is from which even big B-Town celebs as well as the PM Modi itself cannot escape. However, they at times forget that they too can become a victim of people’s rage on web and this is why Raveena Tandon was trolled on Twitter and that too, for a 5-month old tweet.

It so happened that Raveena Tandon, a famous and much-loved actress of her time, shared a joke on Twitter which she found funny around 5 months back at the time of India-Pakistan World Cup that took place in February 2015. Although she made an attempt of defending what she tweeted, convincing that the so-called tweet was merely a joke, Twitter users did not forgive her for that and things got worse for her as more and more people started trolling the actress.

Let’s take a look at what happened:

Raveena Tandon tweeted the below joke on February 15:

Hahahah I like this one—-
India Pak cricket match – Jeete to Hina Rabbani hamari.. Haare to Mayavati tumhari.. 😝

Atiya Zaidi, a Twitter user did not find it appropriate and hence complained about its poor taste:

@TandonRaveena It's in very poor taste. NOT amused.

Raveena took no time in reply to Zaidi’s tweet:

This made Zaidi really angry or hurt and he tweeted the following:

Shortly there began a Twitter war and many other users also participated:

@atiyaz then they come on tv shows for women empowerment. Except few,bwood is full of hypocrites like @TandonRaveena

After this all, the actress tried to make her stand clear which proved to be of no use:

@TandonRaveena The saddest part is, you still didn't get my point. Sigh! @RuchikaTalwar

However, Twitter users dragged SRK too in this which was unacceptable on the part of Raveena who could not bear it for any longer:

@RuchikaTalwar @atiyaz also wonder why @atiyaz has reposted this after don't know how many months?isnt this a call for attention publicity

@RuchikaTalwar @atiyaz please learn to chill go watch some stand up comedy shows!They make fun of all of us including all heads of state

@RuchikaTalwar @atiyaz we have rubbish written about us all the time..and plus then to have judgements passed by people like you..

This is how finally the actress tried to put an end to it after a long tough day on Twitter:

Acha to ham chalte hain!! Thank you all for all the love compliments! Had an entertaining day,got trolled debated and laughed a lot ! Peace

What are your views over the complete matter? Was it merely a joke which had been mishandled by Twitter users? Share your opinion in the comments section below!

11 Pictures Of How This Dirty Man Changed Into A HERO Will Amaze You!
10 Words Creating Confusions By Holding Different Spellings In American & British English