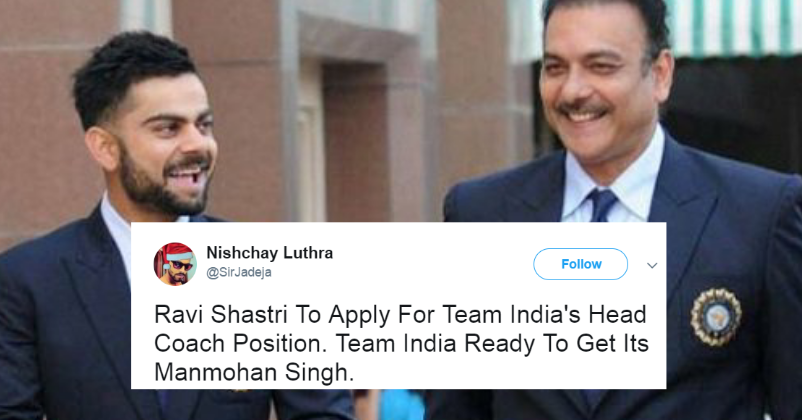 Virat Kohli, the captain of Indian cricket team, has become the target of many after India lost the final of ICC Champions Trophy against Pakistan and after the head coach of the team, Anil Kumble, resigned. As the legendary leg-spinner made it clear that the captain was not happy with him, Kohli was slammed by great names of Indian cricket including Sunil Gavaskar.

BCCI has extended the date for sending applications for the post of coach and former Indian cricketer Ravi Shastri has shown interest in the same. This is not a secret that Shastri and Kohli share a good bond and the latter will prefer the former as a coach rather than any other applicant. Shastri has served as the team director from 2014 to 2016 and he was also in the race for the post of coach but Kumble was selected. It is said that the person behind Ravi Shastri’s rejection was former Indian skipper Sourav Ganguly. Twitter users were already upset with Virat Kohli because of the way Kumble was made to resign and with this news of Ravi Shastri applying for the coach, their anger just exploded. We have brought some selected tweets for you:

RT If You Don't Want Him. pic.twitter.com/wgIPRzZqAf

There was no dearth of hate tweets for Virat Kohli:

@imVkohli u might have Ravi Shastri ur best frnd as d coach..but this Anil Kumble saga vl never b forgotten…our feelin for u is not d same

Only Mallya and Shastri can be pleased with Kohli’s arrogance:

If Kohli wants Kumble to go, all sensible people want Kohli not to be the captain.
His arrogance can only please Mallya & Ravi Shastri.

I feel Virat Kohli does not deserve Anil Kumble as coach. He deserves that thug Ravi Shastri.Any self-respecting man would not haved stayed.

Love story of Kohli and Shastri!

Finally Kohli will get what he wants.. Huh..

Ravi Shastri is interested to become the head coach of men's cricket team. Finally, Kohli to get the stooge he was demanding for so long

If virat recommends ravi shastri for coach,then virat is loosing it.Ravi shastri is the most cunning chutiya ever..

Ravi Shastri The next Indian Coach
good?
It would be INSANE
Kohli wanted the guy & he got him
Kohli havent won much but is too demanding

A jibe at Kohli:

Circumstances are nt incidental bt created
Ravi Shastri made to apply for the Head Coach.Well planned startegy & implemented by u knw who!🤐

Only Ganguly can save the team now!

Now, Only Player Who Can Save Team By Bowling Him Out, Is Saurav Ganguly. pic.twitter.com/Zt5E9r2iYn

Its now clear that virat kohli n Ravi shastri spun d web for anil kumble, he being a gentleman wrapped d net around him willing..

After Dhoni, Goenka Took A Dig At Kohli! This Time You Will Agree With Him!
Engineer Applies For The Post Of Cricket Coach To Fight Virat’s Arrogance & Teach Him A Lesson!