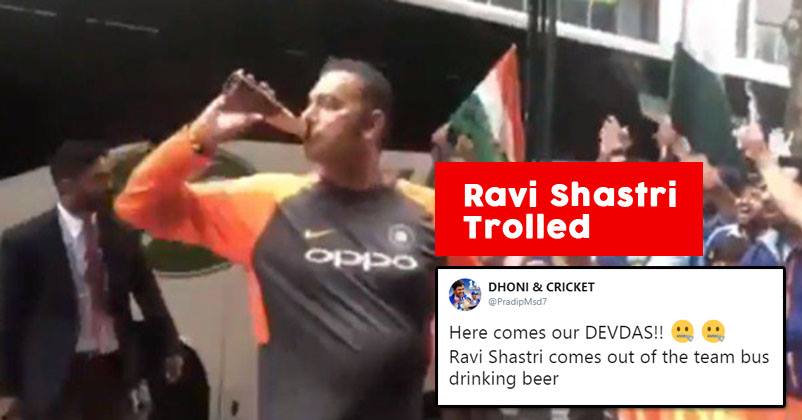 India has a historic win at Melbourne yesterday, and we really couldn’t be prouder about our men fighting on the front line there.

Virat and his men put up quite a show at the last match and they really did deserve to win. Also, as we mentioned, this is India’s first win at Melbourne after 38 years.

Now such an occasion demands a little celebration and we can’t really blame our men for going a tad bit wild in light of this.

#AUSvIND A little dance from @imVkohli as The Bharat Army give #TeamIndia a special welcome back to the team hotel. #BharatArmy #TeamIndia #IndianCricketTeam #COTI 🇮🇳 pic.twitter.com/wEHElXDy9H

In a video that emerged, Ravi Shastri was seen drinking from a can of beer as he stepped out of the bus. While this is certainly not something to be condemned, Twitterati is not all too forgiving.

A lot of people trolled him for it. Check it out.

Ravi Shastri – Australia were 8 down at the start of the day and so am I right now 😂#AUSvIND#INDvAUS#bordergavaskartrophy pic.twitter.com/D1frk8dfv2

1. Enter the party
2. Drink like a fish
3. Trouble Sleeping coz of dehydration
4. Sleep in office for next few days pic.twitter.com/Ue8Jlqo4v7

Probably because he’s not getting old monk rum in straaya..

But some people did support this, and really guys, this is just an ecstatic coach celebrating a massive victory. We don’t even blame him for it. Check it out:

Does he make any chaos?then what's the problem. Don't try to make this an issue. We as an Indian feel happy for this victory n he also a citizen of our country with the same feeling, so let him enjoy. It just a an answer for all those people who start creating news after losing

A lot of people supported him: