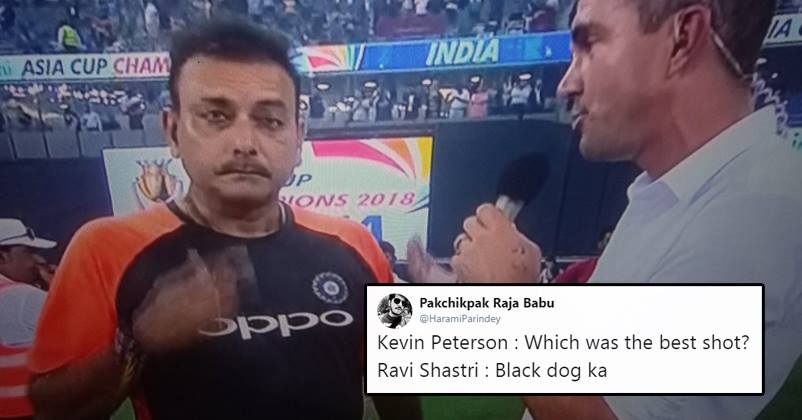 The head coach of Indian cricket team, Ravi Shastri is a favorite of Twitterati and they troll him whenever they get a chance. Yesterday, team India won the Asia Cup by defeating the Bangladeshi team by 3 wickets. It was a nail-biting match with winning run scored on the last ball of the Indian innings.

Ravi Shastri has been criticized a lot by fans as India didn’t perform well in England and now, yesterday’s match also proved that something is wrong with the team. India may have won the match but the way the team performed, it never felt that it is number 2 team of the world in ODIs.

Ravi Shastri has a reputation of a drunkard and his facial expressions also strengthen the belief of people about his drinking habits. A photo is going viral on the Internet in which Kevin Pieterson is seen interviewing Ravi Shastri and the Indian head coach seems to look as if he is under the influence of an intoxicated substance. 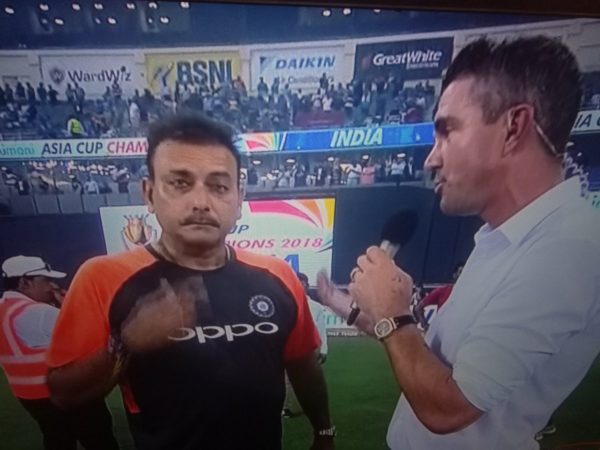 This gave Twitterati enough fodder to take a jibe at him and soon the micro-blogging site got flooded with hilarious jokes and trolls that are too funny to miss!

KP: Amazing match…
Ravi: was it..! I’ll have to watch the highlights #IndvBan pic.twitter.com/sxnU869HRK

Kevin Peterson : Which was the best shot?

KP: Which was the best shot of the match?

Ravi Shastri: Virat is a champion. The way he batted tonight proves that he is the best when it comes to chasing any target.

KP: What do you think about the opposition?

KP: What was your fav part of today’s match?

K.P-How do u felt when India lost their 7th wicket?

Ravi Shastri : we won but execution was wrong

Kevin : Did you believe you would be lifting up the Cup?

Ravi Shastri : I don't know..don't know about the Cup. But I was lifting the glass up to my mouth all the time. What's the score now in the match?

KP: What a NEAT finish..

Ravi Shastri: No no , I had with Soda

KP: I meant Indias NEAT finish to the game pic.twitter.com/A9o0MyofpW

What do you have to say about the viral pic of Ravi Shastri? Let us know.

Bangladeshi Bowler Did Naagin Dance After Taking A Wicket, Got Hilariously Trolled After India Won
The Viral Pak Girl Is Not Nivya Navora. Watch Her Interview In Which She Reveals Her Real Identity