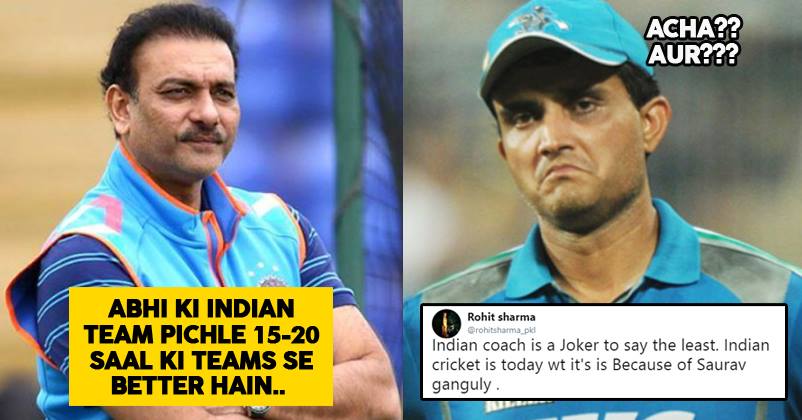 However, the team’s coach Ravi Shastri has come ahead in the defence of the team very strongly, so much so that he called it the strongest team in the last 15-20 years.

Ravi said that the current Indian team put up a good show overseas than any Indian team in the last 15-20 years. He also said the current team has won nine matches overseas besides three series and that’s something never achieved before by any team.

This statement of Ravi has not gone down well with Twitterati who has been trolling him badly. Have a look at some reactions-

We purposely shy from speaking truth..

You forgot to tell Ravi Shastri that Sri Lanka , West Indies were way stronger teams not at the bottom and England was a top test match team and Australia was second best team in the history of the game after West Indies of 80 May be Shastri wants to play another series in SL

Ravi Shastri in PC: "Last three years, we won nine matches overseas and three series. I can’t see any other Indian team in the last 15-20 years who’ve had that kind of run in such a short time. And you’ve had some great players in those series."

Indian coach is a Joker to say the least. Indian cricket is today wt it's is Because of Saurav ganguly . His legacy ll always remain in Indian cricket.Doesnt matter wt Shashtri says

Someone please ask Ravi shastri what his contribution is to this Indian team other than being an overconfident dooshbag in his media appearances.India made some huge tactical errors in this game. Not playing sweep against Moeen. Ashwin bowling far quicker than he should have.

No other Indian team in last 15-20 years has had the same run as this one – Ravi Shastri .
Ravi Shastri there taking inspiration from Jose's post Sevilla game interview. 😋😋

We need a tough taskmaster like Kumble and Dravid or a leader like Ganguly who have the guts to take the responsibility and give the team perfect motivation to win abroad. Right now Ravi Shastri is just there to satisfy the over inflated egos of the seniors in the team.

Coach is protecting him self…I tell u fact that without Ravi shastri team can perform better…you are a coach by playing politics… there are more better options as a coach.

Do you think Ravi Shastri is right?

Fans Trolled Dhawan For Having Fun Despite Losing Test Series Against England. He Had Perfect Reply
KL Rahul Lost His Shoe & It Flew In Air. How Ben Stokes Helps Him In Wearing It Is A Nice Gesture