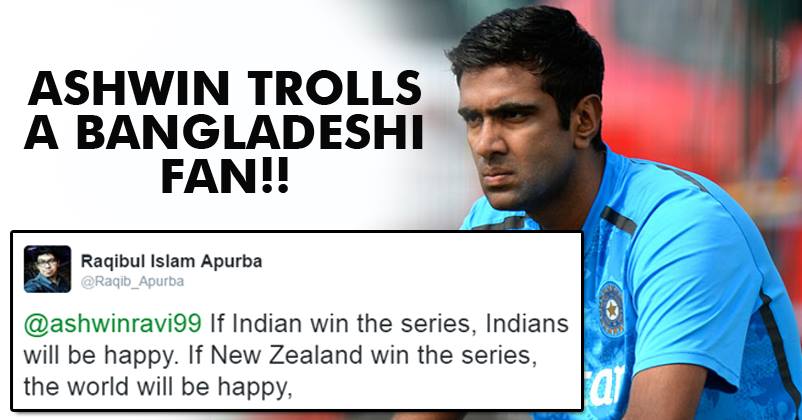 When a cricketer is in his perfect sublime form, it is always advisable to not to mess up with him on and off the field. And Twitter is for sure not the perfect place to have a banter with him.

He is someone who can throw a carrom ball with one hand and can spin a googly with the other one. In such a situation, no one would want to be at the receiving end, but this Bangladeshi guy dared to do that. Ashwin is usually quite active on social media and is definitely not among those who ignore trollers trying to act cool by making fun of celebrities without any reason. When one such troller tried the same, fortunately or unfortunately, he wasn’t spared by R.Ashwin.

And this is how R.Ashwin responded to his childish and immature tweet.

India got independence in 1947, nevertheless thank you.

However, Ashwin’s response was indeed required on this issue, but many people are now discussing on whether was it justified from his side to drag the issue of independence and nationality into this small twitter feud ? No wonder, it was the Bangladeshi supporter who started the fuss.

Students Read The Question Paper Twice When They Saw The Question ‘Who Is Virat’s GF’
Sania Mirza’s Bang On Reply To Manjrekar’s Attempt Of Trolling Is A Tight Slap On His Face!