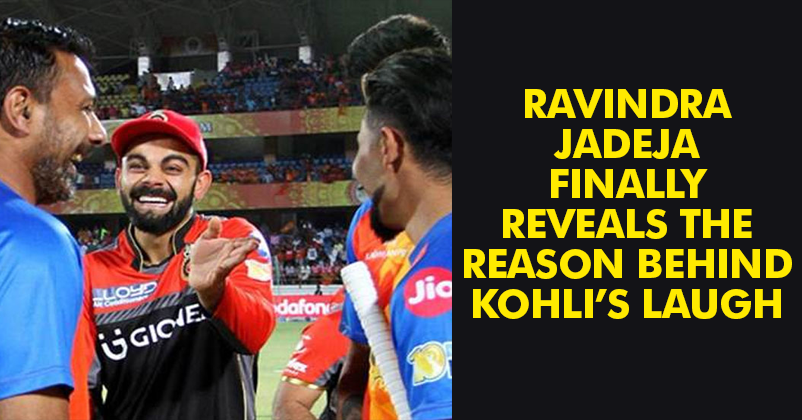 We all remember that famous photo of Virat Kohli laughing heartily looking at Ravindra Jadeja right after he underwent a beard makeover to support BreakTheBeard trend.

Well, the star cricketer Ravindra Jadeja has finally revealed why Virat Kohli was laughing so hard before the IPL match on April 18th in Rajkot. The photo that became a part of all the memes showed Virat pointing fingers at Jadeja and sharing a laugh with Gujarat Lion’s pacer Praveen Kumar. “The picture was taken right before the match with RCB, where Virat started calling me ‘Rajput’. He has nicknamed me that and I feel super proud when he addresses me with that name. Virat and I are like brothers and these fun conversations are a part of our relationship. Everyone in the dressing room looked the same, so I thought let’s try something different. Something that is unique. Once Anil Kumble walked up to me when I was sitting with my face down. He thought I was KL Rahul and started speaking in Kannada. Beards have created a lot of confusion in the team.”

If we remember, Jadeja was the first one to be a part of the #BreakTheBeard trend and he posted the photo of his transformation on Twitter and Instagram.

He wrote on Twitter: “Change the game on the field. Change the look in the dressing room”.

Change the game on the field. Change the look in the dressing room. #BreakTheBeard #rajputboy #newlook #timeforchange #vivoipl #glvsrcb pic.twitter.com/iEr7i7gPIL

Virat and Jadeja will face each other once again on Thursday. Gujarat Lions V/S Royal Challengers Bangalore match will be held at M. Chinnaswamy Stadium.

Let’s see who wins this match as last time RCB nailed it and won over Gujarat Lions. We can wait and watch.

Dhoni Does The Magical Stumping Once Again! Watch Video Of This Awesome Run-Out!
After Bashing SRH Bowler Kaul, Dhoni Had A Superb Message For Him! You’ll Respect Him All The More