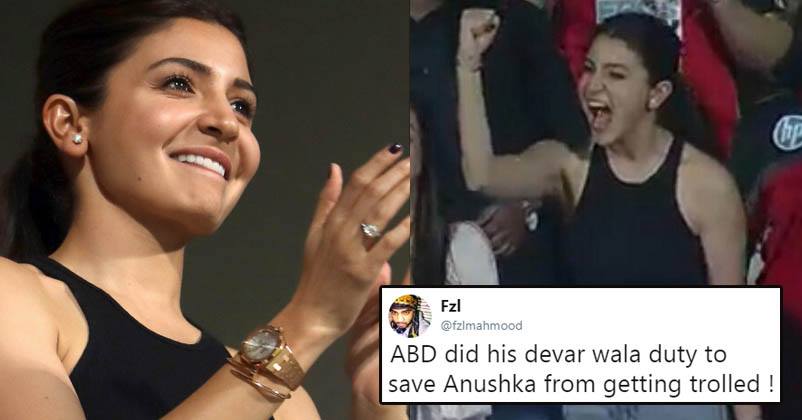 RCB registered a super-duper win at Chinnaswamy stadium today. This match between Kings XI Punjab and RCB was a nail-biting one.

Till the end, we couldn’t figure out as to who would win. Kings XI Punjab made 155 runs, thereby setting an easy target for RCB.

However, RCB struggled to get runs at a fast pace. Quinton de Kock and AB de Villiers saved the game by hitting a whopping 45 and 57 respectively. They could easily chase the target in 19 overs.

Virat Kohli must have felt like a “Lucky man” today because his ladylove Anushka had come to support him. Yes, she was cheering for the team throughout from the stands. Looks as if this ladyluck favored RCB and they won.

While RCB is busy celebrating the win, Twitter feels that Anushka Bhabi’s cheering made it possible. Social media users just can’t stop talking about her.

Check out some tweets;

Anushka Plzzzz be there in all RCB Matchs 💖 lady luck

Anushka is really looking so beautiful can't take off my eyes from her . what magic virat has done

@IamNicck ABD did his devar wala duty to save Anushka from getting trolled ! 😛 #RCBvKXIP

What a match it was! 🔥🔥🔥
My reaction is as same as Anushka ✌💃💃💃 #Virushka #RCBvKXIP pic.twitter.com/rsdb91n4S6

Meanwhile an excited Anushka Sharma in the last over screams ….*Sundar* to which Virat responds….*you beauty*!!!!#RCBvKXIP

Anushka is so happy and I am loving this side omg #RCBvKXIP pic.twitter.com/Gnu5eImFN9

Anushka is lucky for us ♥️ #RCB

Anushka represented the whole FAM!😂♥ Her stress, excitement everything was on point💯#RCBvKXIP

@IamNicck ABD did his devar wala duty to save Anushka from getting trolled ! 😛 #RCBvKXIP

What do you feel guys? Isn’t it rightly said, “Behind success of every man, there’s a woman?”

This Mumbai Indians Player Couldn’t Do Well In First Match But His Girlfriend Is A Beauty Queen
Dhoni Shows His Shooting Skills On Twitter. Fans Say He’s An All-Rounder