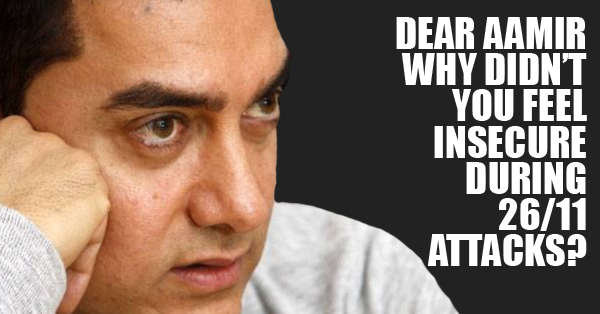 Is India really Intolerant?? This single question had shaken the strong base of brotherhood built over the years between Indians. There are now so many controversies over this one single question that Did Intolerance really increase in the recent past? Pertaining to which recognition were returned..awards were returned.. medals were burnt.. people came on national TV and debated over it..they blamed the government. Phew this doesn’t seem to end here. This issue fumed up more when the same question was asked to SRK, initially people outraged over his response shown by the Media houses but later on it was revealed that his answer was manipulated in a way that media houses would get the TRP they desired for. Yet again another actor is now in trouble over the same issue. And this time its AAMIR KHAN. Aamir Khan in a show last night was questioned about Intolerance and what he spoke in response to that question outraged anger in people across the country. On asking about Intolerance in India Aamir Stated “Kiran Says “Should We Move Out of India” as she is scared looking at the current situations in the country”.
This single statement has put the actor into a big trouble as most people found this statement offensive and Insulting the nation on National TV. There is anger among people over the statement and this surely is not ending soon..

Have a look at the reaction of this woman over Aamir Khans remarks about leaving Country. To which Shefali replied..

What do you think? Do you agree with Aamir Khan? Or Do You Agree with Shefali Vaidya? Comment your views in the comments section below.