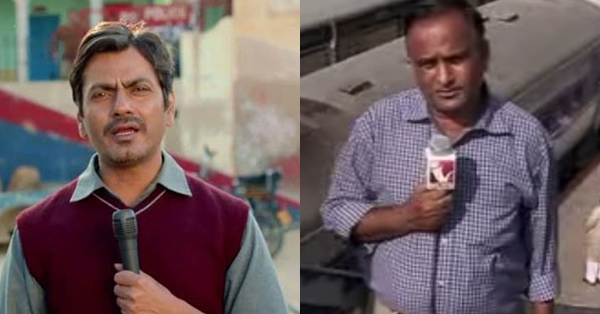 Bajrangi Bhaijaan is surely 2015’s must watch movie. It had successfully managed to make its way straight to people’s heart and thus thrashing one by one all the Records made by movies Bollywood had given in the recent past. But who deserves the real credit for the movie’s success? Is it Salman Khan’s Acting which we finally came to see after such a long time? Or that cute little kid Munni(Harshali) who without uttering a single word managed to make a million fans by doing just one movie. Yes both deserve the credit for the success but in my opinion it was our FAIZAL aka Chandnawab aka Nawazuddin Siddiqui who pulled all the attention. Who made all the viewers jump off their seats and laugh hard. He surely is a LEGEND.
But in the movie he was shown reporting a news on a platform which was taken from a real Incident, wherein a Pakistani reporter doing the same thing which Nawazuddin did in the movie.
I know it is not possible for you to trust me if I say that the Real Chandnawab covering that news was much more hilarious than that of Chandnawab doing the same thing in the Movie!! Don’t Believe me? Watch both the videos and you decide, which one was better. Here is the real Chandnawab from Pakistan: