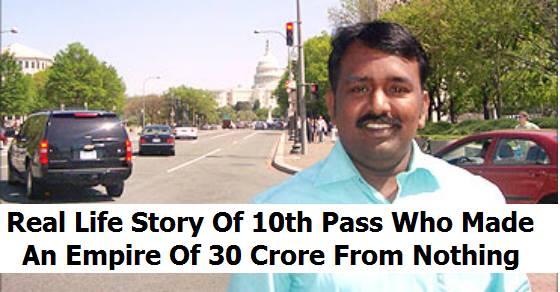 He did not have a job, qualification 10th pass and no assets at all. To earn basic livings, he came to Mumbai and Wow, had been robbed outside Bandra station. At that time, he had merely Rs. 200 along with few other things. But after robbery, nothing left with him except the clothes on his body.

Earlier, he had an income of Rs. 250/month in Chennai that he sent to his family. To talk about members in his family, there were his parents along with 7 siblings. He was only 17 when he reached Mumbai in 1990, with absolutely nothing except willpower and firm resolution. What’s more, he didn’t know Hindi so a Tamilian got moved by his circumstances. He was taken to a temple by that man who pleaded people walking by for contributing some wealth so that he could buy a ticket for going back. Nevertheless, Prem Ganapathy, the desperate boy of 17, had firm belief that his life would take a new turn in this city only. Later, Mahim Bakery gave him the job to wash utensils on a salary of INR 150 monthly. Besides, he worked for some eateries for earning more so that he could save. It took him nearly 2 years to save the required amount for starting his own business. He took on rent a pushcart as well as purchased few utensils and a stove worth Rs. 1,000. In 1992, he began to run his idli selling business, first alone but later involved his younger brothers in this work too. His strength was to maintain proper hygiene, as each of them used to wear a cap. Customers were highly surprised with this because no one ever paid attention whether roadside restaurants take into consideration hygiene sort of things.

His handcart got seized a number of times and each time, he paid penalty for getting it back because these kinds of pushcarts were not given any license. Some years later, Prem managed to save a good deal of cash, so he decided to lease a store and deposited Rs. 50,000 for the same. With a rent of INR 5,000/month in addition to hiring 2 more staff members, Prem’s previous roadside handcart took shape of a mini restaurant. His customers included college students too with whom he learnt how to use the Internet and began to seek new recipes. Additionally, he experimented a lot with dosas which resulted in introducing of its 26 new varieties, such as Spring Roll Dosa, Schezwan Dosa etc. Surprisingly enough, he presented his customers 105 afresh types of dosas by 2002 and as an outcome, his restaurant gained much name and popularity.

But this was not all he wanted. His dreams were above and beyond it, i.e., a brand outlet inside a mall! For this, he made his way to lots of malls, however, neither of them could not proceed with his proposal because brands such as McDonald’s already got it reserved. At last, Prem got a chance of opening an outlet in Center One Mall for the reason that its administrative personnel had been his regular customers. The outlet proved to be very successful and as a result, folks began to ask for franchisee and the agreement was done considering that the original one would provide each and every ingredient.

By 2012, they owned around 45 eateries in 11 states of India plus seven at overseas countries including Dubai, New Zealand, etc. And this all had only one name, ‘The Dosa Plaza.’ The 17-year old penniless boy standing outside Bandra station in the year 1990 attained success in establishing an outlet of his own with a brand name and created a kingdom of Rs. 30 crores in 2012 all by himself with confidence and determination.