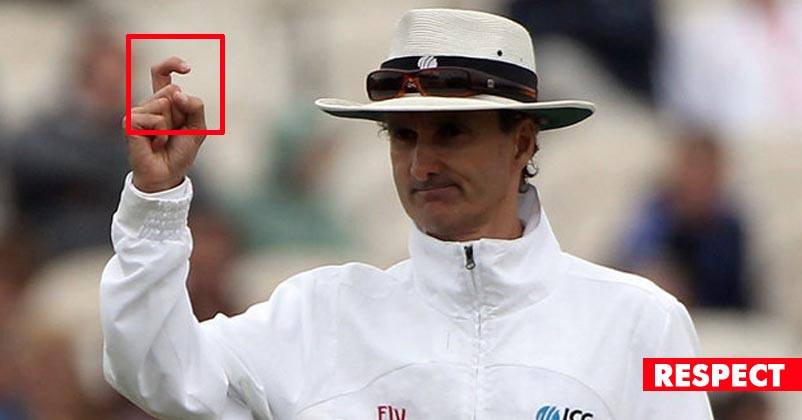 Everyone who has ever seen Cricket or has followed the sport is familiar with Billy Bowden. This umpire is famous for his unusual umpiring style. He has officiated in 200 ODI and 84 Test matches over a period of more than 20 years. He’s best known for his unusual yet entertaining mannerisms like raising a crooked finger to announce a dismissal. Billy Bowden was once a promising fast bowler in his 20’s until he began to suffer from rheumatoid arthritis which forced him to give up the career as a player. He took up the job of umpiring because Cricket was always his first love. Billy Bowden became famous for his unique, one-of-a-kind umpiring signals, like not holding the index finger straight to signal a dismissal, but holding it crooked, which became famous as the “crooked finger of doom”. His creative ways of signalling the boundaries, his entertaining mannerisms surely made umpiring a fun job. This colorful character brought the entertainment factor to the boring job of umpiring.

So let’s take a look at 5 Things That You Must Know About Billy Bowden!

The secret behind the ‘crooked finger’ is Arthritis He had to give up his cricketing career due to his battle with rheumatoid arthritis. Billy Bowden cannot lift his index finger to signal a batsman out. Normally most of the umpires use the conventional fashion to signal a dismissal, with a straight index finger raised above the head, but Billy’s style of dismissal became famous as the “crooked finger of doom”. Bowden became well known for his eccentric signaling during games, he added his own touch to several other signals. Using the “crumb-sweeping” wave of the arm to signal four, and the “double crooked finger six-phase hop” to signal a six. His over-the-top signalling style, the way he refers a decision to the third umpire, his antics made him the most entertaining umpire in the sport. His signalling style vary with the format, orthodox style in Tests, flashy in ODIs and over-the-top flamboyant in Twenty20. Yes sir, this is Cricket, but that didn’t stop Billy from showing the red-card to the cricketers on two different occasions. Bowden showcased his theatrics skills way back in 2005, the first ever T20 International between New Zealand and Australia at Eden Park, Auckland. McGrath was all set to pull off the underarm delivery against Kyle Mills during the last ball of the match. But Billy Bowden showed him the red-card. It happened again when the Afghanistan wicket-keeper Mohammad Shahzad was appealing unnecessarily, Bowden showed him the red-card.

Axed from the International Panel of Umpires and Referees The International Cricket Council’s elite panel dropped him from the panel in 2013, but he returned in 2014. He was axed finally after umpiring his last test between the West Indies and England in Barbados in May, 2015. So Billy Bowden’s crooked finger won’t be giving out any more batsmen now. He is also the second youngest, behind only Simon Taufel, to officiate in a 100 One Day Internationals. He’s also one of the only 7 umpires who have stood in a 100 One Day Internationals.

More than an Umpire! Billy will be remembered not just for his 200 Tests, 84 ODIs, but for his unusual yet entertaining mannerisms like raising a crooked finger to announce a dismissal. He made the boring job of Umpiring look like fun. This sport and the followers of the game will forever remember his dramatic signalling style! Day 2 Collections Are Out ! Once Again Katrina Beats Nawazuddin Badly By Big Margin!
Remember Shweta Basu From ‘Makdee’, Here Is How She Looks Now!!!